Welcoming M Lynes and his book - Blood Libel - to my blog 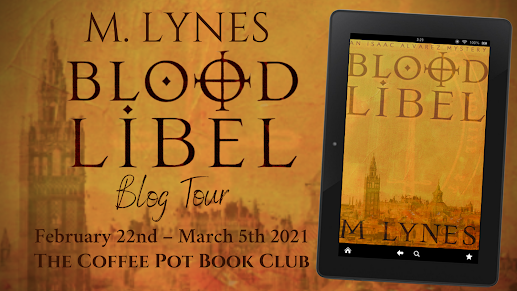 I am delighted to be able to share a review with you all, but first I will introduce the book. 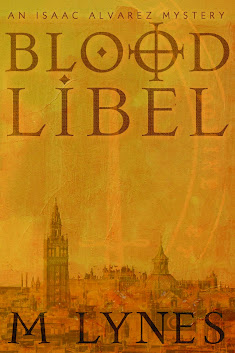 The mutilated body of a child is discovered behind a disused synagogue. The brutal Spanish Inquisition accuses the Jewish community of ritual child murder - the ‘blood libel’. The Inquisition will not rest until all heretics are punished.

Isaac Alvarez, a lawyer working for the royal estate, is a reluctant convert to Catholicism who continues to secretly practice Judaism. When his childhood friend is accused of the murder Isaac is torn between saving him and protecting his family. Isaac is convinced that solving the murder will disprove the blood libel, save his family, and protect his faith.

As the Inquisition closes in how far will Isaac go to protect both his family and his faith?

In the town of Seville, nearing the end of the 1400s, there has been a murder, the murder of a young boy. The blame is pinned on the Jews and it does not take long for the Grand Inquisitor of All Spain to make his way into town, ready to do whatever it takes to find all the Jews and to rid the world of them. By his side is Friar Alonso, who, albeit less eager to torture and kill, helps with the mission at hand. In particular, there is one man that they are after – a man by the name of Isaac Camarino Alvarez. However, Isaac works for the King and to accuse him of lying about renouncing his faith and converting to Catholicism would require proof.

The absolute horror that befalls Isaac’s life was tragic to read about. He cannot save his friends without effectively giving up his family’s lives, which is something he cannot do. He has a wife and two children, whose lives are all dependent on the fact that none of them can slip up, say the wrong thing, look the wrong way. The Grand Inquisitor does not need much to condemn them and Friar Alonso is looking for anything and everything. With neighbors reporting on neighbors, many of those who are arrested are not Jewish, but the torture that they endure will either kill them or lead to a confession in the hopes that the pain will end. However, a confession means a death sentence and Isaac must endure the knowledge that people he knows are being tortured and killed, while he can do nothing to help without exposing himself. His situation is an incredibly difficult one and I felt for him, for what person wouldn’t do anything to protect their family, even if it meant watching other loved ones taking the brunt of the consequences.

The author has depicted a world that has come alive in the telling, bringing characters into it to tell the story of one man who must do anything he can to remain out of the inquisitor’s suspects, and of another man who is looking for any slip up that might lead to the success of his mission. I found it incredibly difficult to put this book down and the story seemed to build itself around me as I read, the terrible position that Isaac finds himself in making me silently hope that he would survive and that his family would get through the inquisition unscathed, even though it seems that such a thing is an impossibility. 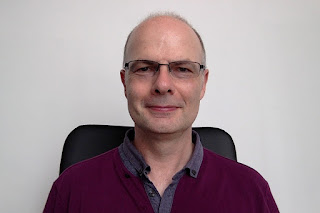 Michael is an author of historical mysteries who writes under the pen name of M Lynes. He has a particular interest in early 16th century Andalucia. He is fascinated by the interplay between cultures, globalization and religious intolerance of that period in Spain’s history. The ‘Isaac Alvarez Mysteries’ are set against this rich background. He won a prize for his fiction at the 2020 Emirates Literature Festival and is an alumna of the Faber Academy’s Writing a Novel course.

His debut novel ‘Blood Libel’, the first full-length Isaac Alvarez Mystery, was published in January 2021. Isaac, a lawyer working for the royal estate, must solve a brutal child murder to protect his family and his faith from the Spanish Inquisition.

Michael is hard at work on the second novel in the series and planning the third. He is originally from London but currently lives in Dubai with his family.

You can connect with Michael via -

You can find out more about the book and the author by visiting the other blogs on this tour. 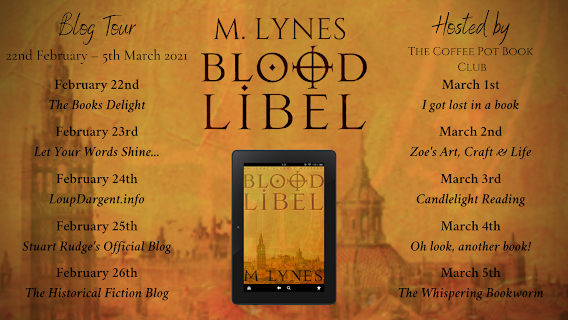 Thank you so much for hosting today's blog tour stop!