So my post today is in parts - feel free to read some or all of it as you wish.. I'm linking up with Julia and everyone else over at The Stamping Ground. 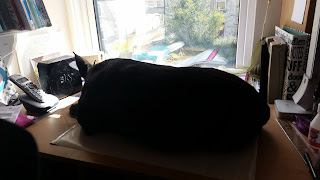 No, your eyes are not deceiving you that really is a dog on my desk. Baxter. My constant companion. He loves to sit on the desk to watch the world go by. He usually sits, but he decided to lie down earlier so I snapped the photo quickly before he changed his mind. When the sun shines he makes sure he gets what parts of him he can in those rays!
The rest of my post is my tribute as a football fan following yesterday's historic verdict finally delivering justice for the 96 Liverpool fans who were unlawfully killed at Hillsborough on 15th April 1989. 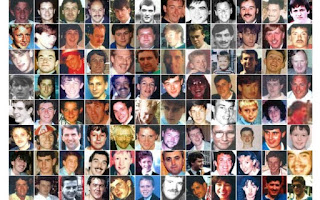 On that day in 1989 I was with my family watching Bristol Rovers play away at Brentford. I was 13 years old. Like every fan who goes away to a game you think about the match, the result and enjoying the atmosphere with your fellow fans. Today I have some memory of being in the ground at Griffin Park that day, but unless I google it I can't remember the result nor the team that lined up. I do remember parts of the journey home. Sitting in silence. Listening to the radio. Trying to understand what was being said.

At no point did I think of my safety nor the possibility of never going home after the match that day.
Those Liverpool fans would have started their day like we did. They went to that match thinking about the game, thinking about what the result maybe and were most definitely looking forward to the atmosphere of a cup game.
Like me, I'm sure they never thought of their safety or the possibility of never going home after the match that day.
But 96 football fans never did go home.
Here we are 27 years later and finally the truth has been told. Justice & the proper unlawful killing verdict has been granted.
As a football fan who went all over the country in the late 80's and early 90's as a child and as a teenager with my family, I experienced those pens and fences and barriers that were present at every ground. Like every other fan. Those 'safety' measures were not like ones you see today. I still remember how it felt being crushed up against a fence or a gate. It happened to me a couple of times. It was only for a few moments. But. Still.
It was horrific.
I can't let myself think about what those Liverpool fans experienced that day.
The years that followed will go down in history as one of the biggest cover ups & legal battles.
I went to Hillsborough to watch Bristol Rovers. Think it was 2007/2008 season. I took Keagan. I remember arriving down the famous Leppings Lane road. I remember standing outside the away end looking up and down the road. I remember feeling uneasy. It seemed even smaller in reality. This road. This road that 24 thousand Liverpool fans would've walked down. The area outside the turnstiles was supervised and organised for us. But it didn't take much to imagine what it must have been like for those fans.
I couldn't stay outside.
We sat in the upper tier looking down over the central areas. I couldn't help squeezing Keagan's hand tighter. Even with all the seats and modern safety in place I felt on edge. Uncomfortable. My head was filled with those pictures we've all seen on tv. Rovers lost 6-2 that day. It didn't matter to me. Not that day. Not there. 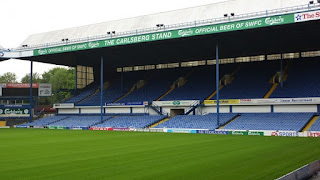 This is the away Leppings Lane end now. The tunnel is still there. I think we were sat in the middle section above it. Right above the 2 central areas.
I've never visited the memorial at Hillsborough for the 96 fans. 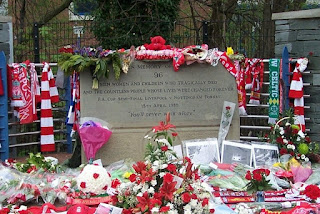 I regret that now.

Over the years I've stood in silence or in applause to honour the 96 at numerous football matches. As the years went on my respect and admiration for the families grew. They never gave up. No matter what was thrown at them. They stood up to the dinosaurs and those in power.

As a football fan you just knew those Liverpool fans were not to blame.

I can't imagine how the families must feel today. 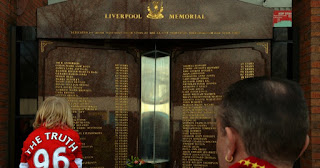 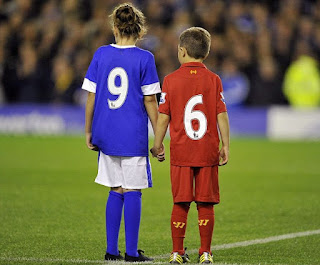 Posted by CraftygasheadZo at 12:51 12 comments:

Hello everyone - apologies for my blog quietness. I promise I'm making up for the silence in usual Zoe chatterbox-style!

Today I'm here to share my desk as per many over at Julia's Stamping Ground why not pop by and join in? 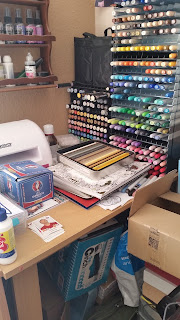 Right hand side looking untidy - there's my Prismapencils & colouring book, lots of boxes under desk and a box of Euro 2016 stickers. 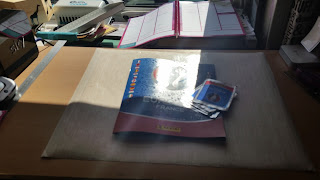 Window side is a bit sparse. The sun is shining beautifully this morning. You can see my planner in the window as well as my Cinch machine. On my desk is the Euro 2016 sticker album. 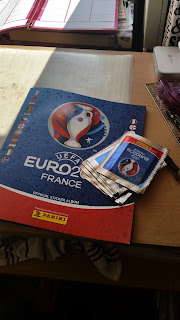 Yep I decided to go with my inner child and collect football stickers for this Summer's Euro's in France. It worked out cheaper to buy a box of sticker packets than to keep buying odd ones. I'm fighting the urge to stick them all in one go! I'm just grabbing a few packets each day and am thoroughly enjoying the process.

There you go. Not crafting as such but it is sticking!!
Take care Zo xx
Posted by CraftygasheadZo at 10:57 34 comments: