You may have noticed I have not posted for a very long time. Life has just taken over. So today it is a catch up post of sorts as so many things have changed.

Firstly my craft room has moved!

As many of you know Keagan worked away as his career is in Horse Racing. He only came home for the odd night or so and for his holidays. Anyway I was growing out of my craft room (box room in our house) so I asked if I could have the rooms swapped. Keagan's bedroom is now in the smaller room and my craft room is now in what was his bedroom! 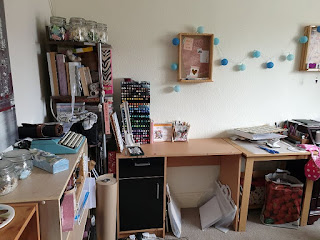 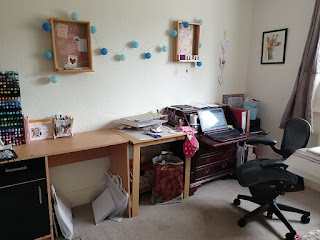 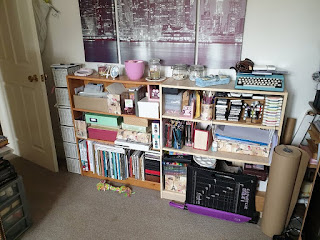 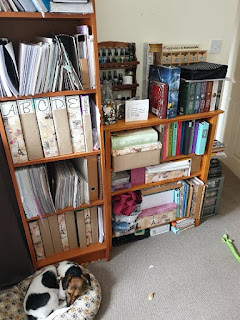 I've much more space and it's so much lighter as I'm not having to stack bookcases on top of each other as I did in other room. I also covered storage boxes with matching wrapping paper and plain kraft paper so it all matches a bit more than it did. I spend a lot of time in my craft room now and have taken up drawing again. I am enjoying my room and crafting. It had got to a point where I stopped crafting as I didn't like being in the small, dark room. BUT now I have a wonderful room to create and enjoy.

At the end of January, Keagan changed jobs. His ambition is to try and work his way up through the Jockey ladder. He currently holds the licence which allows his to race at point to point level. An opportunity arose to work for the record breaking/champion P2P Jockey Will Biddick in his Pre-Training and Breaking yard as a Novice Jockey (Keagan was a work rider previously).

Will is well known for mentoring young jockeys and helping them progress their careers. So Keagan leapt at the chance and has been working there ever since. It is only 25 mins away from home so Keagan has moved back to live with me.

Keagan has not only raced his own horse Doctor Wong, but he has also been given the opportunity to ride for other owners/trainers which is exactly what he wanted. He has already come 2nd, 3rd and 4th a number of times so that win isn't too far away hopefully!

Thankfully he didn't ask to swap his bedroom back to the bigger room so my craft room remains in its new location!!

I guess the other news again many of you who follow me on other social media will know that I had to have Baxter put to sleep over a year ago now and that I have a new puppy - Asher - who is now 16 months old. He is a Jack Russell. You can see him sleeping on his bed in my craft room. I've had him since he was 8 weeks old.

Family have helped me with him as obviously I needed their help. He is such a wonderful companion who is everything a puppy should be - cheeky, playful and fun, but he is also calm when needed, well behaved and clever. Having him from such a young age has meant I have been able to train him so that he fits in with me.

Anyway I promise I will try and join in with WOYWW regularly and hope to post more often.
Take care Zoe
Posted by CraftygasheadZo at 12:20 22 comments: