The Prisoner of Paradise 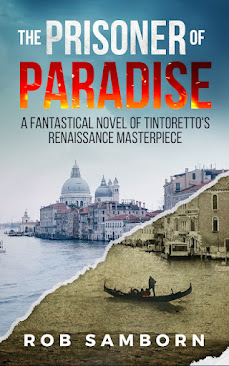 Nick and Julia O’Connor’s dream trip to Venice collapses when a haunting voice reaches out to Nick from Tintoretto’s Paradise, a monumental depiction of Heaven. Convinced his delusions are the result of a concussion, Julia insists her husband see a doctor, though Nick is adamant the voice was real.

Blacking out in the museum, Nick flashes back to a life as a 16th century Venetian peasant swordsman. He recalls precisely who the voice belongs to: Isabella Scalfini, a married aristocrat he was tasked to seduce but with whom he instead found true love. A love stolen from them hundreds of years prior.

She implores Nick to liberate her from a powerful order of religious vigilantes who judge and sentence souls to the canvas for eternity. Releasing Isabella also means unleashing thousands of other imprisoned souls, all of which the order claims are evil.

As infatuation with a possible hallucination clouds his commitment to a present-day wife, Nick’s past self takes over. Wracked with guilt, he can no longer allow Isabella to remain tormented, despite the consequences. He must right an age-old wrong – destroy the painting and free his soul mate. But the order will eradicate anyone who threatens their ethereal prison and their control over Venice. 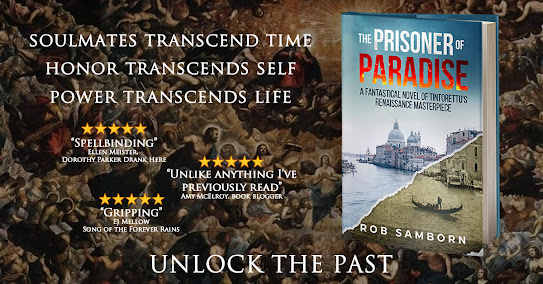 Angelo’s breath caught in his throat. Siòra Scalfini differed dramatically from her friends. Her flawless olive skin was not powdered white. Her eyes smiled. They were sparkling, like polished marble, offering a reflection of himself in her dark pupils. But they weren’t marble—they were alive and vibrant, twinkling with innocence and sensuality simultaneously. Her glance pierced his soul. Angelo was overcome by her radiance.

Ivan prodded him and flourished his hand in introduction. “May I present Angelo Mascari, the finest young swordsman in La Serenissima.”

The woman bowed her lashes and extended her gloved hand. Angelo took it and brought it to his lips. The embroidered white leather smelled exquisitely floral but with a stronger scent mixed in, possibly cinnamon or pepper.

“I am enchanted, my lady,” said Angelo.

Her eyes widened. “Are you suggesting I am a witch, sir?”

“That I can enchant you with a spell?” Isabella continued in a solemn tone.

“How he blushes,” Isabella said, giggling along with her friends. “At ease, my good man. I only tease.”

She locked eyes with Angelo over their joined hands. He swayed back. Her contemplation of him felt deeply intimate, though a moment prior she had been playfully mocking him.

A pleasurable sort of queasiness rolled through Angelo’s gut. He was reluctant to release her fingers, but Ivan tugged at his sleeve.

“There you are.” A loud voice resonated from behind the group. Renzo Scalfini took his place at his wife’s side.

Ashamed, Angelo dropped her hand at once.

Angelo fought to regain his composure. “Happy Christmas, siòr,” he managed, extending his hand to Renzo.

Renzo narrowed his eyes, not reciprocating the salutation. “This is the swordsman you were squealing like washer girls about?” he asked Vito and Ivan.

Vito laughed off the insult. “One of the Republic’s most promising. He’s in need of a sponsor. Are you not, Angelo?”

“It would be an honor,” he said to Renzo.

“I think not,” Renzo snapped. “You speak of honor, yet you have none.”

“Siòr?” Angelo asked, shocked at this accusation. “Have I offended you in some manner?”

“You gape at my wife with lecherous eyes and have the audacity to ask if I have been offended? Not only do you lack honor, but you also lack intelligence or sincerity. Or perhaps all three.”

“Siòr Scalfini, I assure you, while your wife is a remarkable beauty, I had not an inkling she was your wife, nor anybody’s wife. You have my humblest of apologies.” With that, Angelo bowed low in deference but kept an eye on the lady.

Isabella lit up at Angelo’s description of her. Renzo noticed her reaction. “Come, Isabella,” he said, practically dragging her away.

The Bird Brothers exchanged a brief look of disappointment. They bowed their heads to the remaining women, then guided Angelo back to the other end of the hall.

“That did not go as planned,” Ivan said. He pulled Angelo’s ear to him. The man’s pungent breath reeked of wine. “You were expected to curry his favor now and seduce his wife later, not instantly repel him.”

“You have squandered this opportunity, Mascari,” Vito agreed.

Angelo watched Isabella, who had returned to her friends. His chest expanded with an unfamiliar ease. “All is not lost.”

“And how is that?” Vito asked. “He didn’t consider a sponsorship for an instant.”

“I do not need a man’s sponsorship to win a woman’s affection.”

Ivan and Vito followed Angelo’s gaze across the room. He was staring at Isabella, entranced.

As if she heard his mental call, she turned to him, smiled, and batted her eyelashes. He could have sworn that in that moment, something flickered in her eyes. Something… angelic. 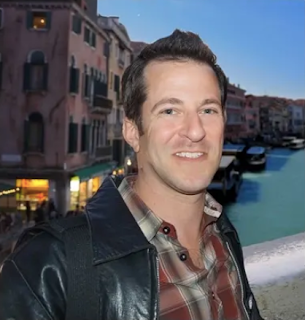 In addition to being a novelist, Rob Samborn is a screenwriter, entrepreneur and avid traveler. He’s been to forty countries, lived in five of them and studied nine languages. As a restless spirit who can’t remember the last time he was bored, Rob is on a quest to explore the intricacies of our world and try his hand at a multitude of crafts; he’s also an accomplished artist and musician, as well as a budding furniture maker. A native New Yorker who lived in Los Angeles for twenty years, he now makes his home in Denver with his wife, daughter and dog.

You can connect with Rob via these platforms - 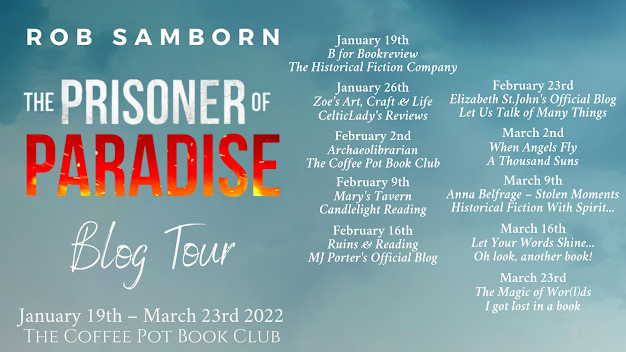 Posted by CraftygasheadZo at 08:00 2 comments: