Welcoming Cynthia Ripley Miller and her book - A Sword Among Ravens - to my blog. 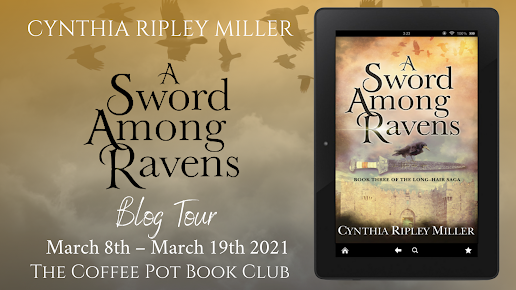 A Sword Among Ravens 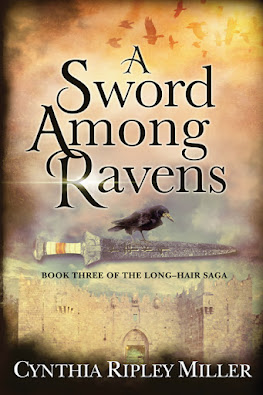 In a grave, on the edge of a Roman battlefield, an ancient sword has been discovered. Legend claims it belonged to King David of Israel and carries a curse—those who wield it will tragically die—but not the chosen.

AD 455. Arria Felix and her husband, Garic the Frank, have safely delivered a sacred relic to Emperor Marcian in Constantinople. But now, Arria and Garic will accept a new mission. The emperor has asked them to carry the sword of King David of Israel to the Church of the Holy Sepulchre in Jerusalem where Arria will dedicate it in her murdered father’s memory.

As Arria and Garic travel into the heart of the Holy Land, they face many challenges and dangers. Their young daughter is missing then found in the company of a strange and suspicious old monk. A brutal killer stalks their path. And a band of cold-blooded thieves is determined to steal the sword for their own gains. But when Arria confronts the question of where the sword should truly rest—old friendships, loyalties, and her duty are put to the test like never before. At every turn, Arria and Garic find themselves caught in a treacherous mission wrapped in mystery, murder, and A Sword Among Ravens.

“A Curse on one who wields David’s sword…” well, I don’t know about you, but that certainly sent a shiver down my spine.

Set in the late 5th Century, A Sword Among Ravens is one of those books that is unputdownable. I could not turn the pages fast enough, and I was completely captivated by the fast-paced narrative. The story is a race against time. The Sword of David must be placed under the protective care of the Church of the Holy Sepulchre in Jerusalem. But, as the whispered rumours of the existence of the sword sweep the continent, the sword becomes a target and those who have been charged with keeping it safe find themselves in an unprecedented dangerous position. There are many who would happily steal the sword, by any means, if the price is right.

I thought the idea of King David’s sacred sword was an inspired idea, and the author takes us on an unforgettable journey along with Arria and Garic and they endeavour to deliver it to the Church unhindered. I really liked reading about this husband and wife team - and I grew to admire them as this story progressed.

The author has decided to let her readers glimpse into the minds of the antagonists as well as the protagonists, which I thought really helped propel this story forward. The antagonists, and there are several, really help to drive this story forward, and there is a menace about them which certainly helped to keep my attention throughout this novel.

I thought it was very telling how those of the Christian religion believed that the sword should come under their protection. Although the Sword of David is fictional in the telling, it was interesting to read that the Jews were not allowed into their Holy City during this period of history - which considering, King David conquered Jerusalem and made it the capital of the Jewish Kingdom must have been a terrible blow to them. There is some debate in this novel about whether the sword should really be returned to the Jews. Still, like Jerusalem, there was no way that was going to happen.

I have not read the first two books in this series, and although this initially concerned me, my fears were soon laid to rest for this novel stands alone. I really enjoyed reading this novel it is filled with mystery, tension but also love and laughter.

If you love historical fiction that has a touch of mystery as well as the celestial in it, then I think you will enjoy this book! 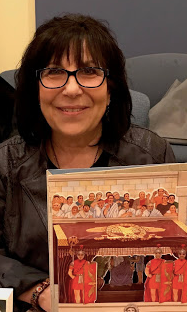 Cynthia Ripley Miller is a first generation Italian-American writer with a love for history, languages, and books. She has lived in Europe and traveled world-wide, holds two degrees, and taught history and English. Her short fiction has appeared in the anthology Summer Tapestry, at Orchard Press Mysteries.com, and The Scriptor. She is a Chanticleer International Chatelaine Award finalist with awards from Circle of Books-Rings of Honor and The Coffee Pot Book Club. She has reviewed for UNRV Roman History, and blogs at Historical Happenings and Oddities: A Distant Focus and on her website, www.cynthiaripleymiller.com

Cynthia is the author of On the Edge of Sunrise, The Quest for the Crown of Thorns, and A Sword Among Ravens, books 1-3 in her Long-Hair Saga series set in Late Ancient Rome, France, and Jerusalem. Cynthia lives outside of Chicago with her family, along with a cute but bossy cat.

You can connect with Cynthia via the following platforms - 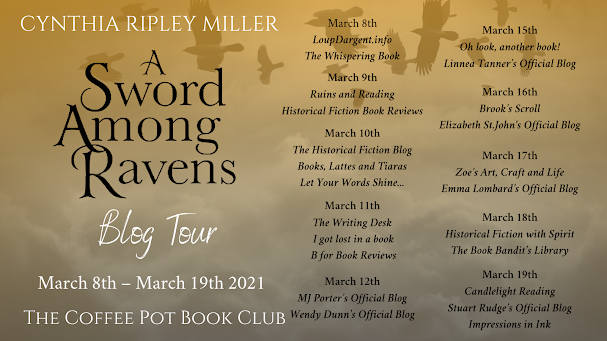 Thank you so much for your review. I'm so happy you enjoyed my story. It's much appreciated!