Welcoming M. B. Zucker and his book - The Eisenhower Chronicles - to my blog

Today I'm welcoming M. B. Zucker and his book - The Eisenhower Chronicles - to my blog as part of the blog tour hosted by The Coffee Pot Book Club (founded by Mary Anne Yarde) 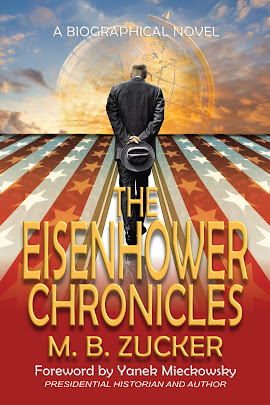 In 1938 he was a lieutenant colonel stationed in the Philippines; by 1945 the world
proclaimed him its savior. From leading the forces of liberal democracy against history’s most evil tyrant to the presidency, Dwight D. Eisenhower fought for and kept the peace during the most dangerous era in history.

The Eisenhower Chronicles dramatizes Ike’s life, portraying his epic journey from unknown soldier to global hero as only a novel could. He is shown working with icons such as FDR, Winston Churchill, and Dr. Martin Luther King Jr., and confronting challenges like D-Day, the Little Rock Crisis, and Sputnik.

Eisenhower’s legacy is grounded in defending the world from fascism, communism, and nuclear weapons. This novel shows how he accomplished it all and takes readers into his mind and soul, grounding the history in the man who made it.

“An ambitious novel that illuminates the complexity of one of the great figures of the twentieth century. Ike's homespun manner concealed a remarkably skilled, at times Machiavellian, leader who guided the nation through perilous times. M.B. Zucker brings us inside Eisenhower's world as he wrestles with a series of decisions affecting the survival of free government and the fate of humanity. This is a fun, fast-paced, informative read that captures the man and his times. Highly recommended.”

-Stephen F. Knott, Professor of National Security at the Naval War College and author of Washington and Hamilton: The Alliance that Forged America

“A most important aspect of M. B. Zucker's The Eisenhower Chronicles is that it dispels at least two myths about Ike's presidency: that it was but an appendage to his illustrious military career; and, that Eisenhower was more prone to react to events rather than shape them. In a lively and innovative style, Zucker shows his readers how Ike managed the Cold War during its most dangerous period and helped make his country a more fair and just society at home. A must read for anyone interested in mid-20th century America.”

-Alvin S. Felzenberg, presidential historian and author of The Leaders We Deserved and a Few We Didn't

“Zucker's achievement is monumental. In a fast-paced narrative, he captures Dwight D. Eisenhower with mastery and precision-his thoughts, emotions, decisions, and actions. The smooth prose and rich detail put the reader right there with Ike at every step of his military career and presidency, with an accurate and compelling rendering. This is historical fiction at its best.”

“This is a vast and minutely detailed account of Eisenhower as both supreme Warlord and President of the United States at a time of truly massive transformation.It is magisterial in its informed account and sweeping in its scope. It is a panoramic study, intensively researched, of Eisenhower as both a private person and a world figure.... Five stars and highly recommended.”

You can buy a copy of the book via -

Ike can't decide whether or not to run for President. He doesn't want to, but the Korean War and the Cold War stimulate his sense of duty. One night, his subconscious sends him a message...

Feel disgusting. So sweaty. Bet I could see my chest hair through my Ike Jacket right now. Because of how soaked I am. Don’t look at it. Why am I wearing my full uniform and jacket in this heat? Where am I?

Ike’s gaze rose from the ground to the grassy fields. White oak and magnolia towered over him, though their shade did not diminish the heat or humidity. Gardens stretched in every direction. A large estate loomed in the distance, a great wooden mansion at its center. Its roof was bright red, and its walls were white wood. A circular dirt path sat in front of the building surrounding a large patch of trimmed grass. Single-story wings flanked the mansion on each side.

Why does that building look so familiar? Shouldn’t trespass. But I’ll pass out if I don’t get a drink of water.

Ike stumbled toward the mansion, every step a struggle. No sooner did Ike begin his quest than a man on horseback intercepted him. He wore a corn yellow worn-out vest and a black tricorn hat that shaded his shoulders. Sweat shone on his forehead. His black horse neighed as he came to a stop. Ike looked up at him.

What the hell is he wearing? Either he’s out of fashion, even for a farmer, or I’m so old I missed the new look.

“What’s your name?” the man on horseback asked, his knuckles white from gripping the reins.

Ike felt an unconscious jolt; he’d been famous for a decade. This was a nice change of pace.

“I commanded the European Theater.”

“Europe? You mean you were with Dr. Franklin?”

“That’s a strange uniform for a general,” the man said.

“You don’t like my jacket?” Ike asked as he glanced at it briefly. “I know it’s a sweaty mess, but I designed it myself.” He looked the man in the eye as his horse trotted to his right. “You haven’t given me your name yet.”

“Sure,” Ike muttered quietly. “Where am I exactly?”

“You’re on the most famous estate in the country. Maybe the world.”

Mount Vernon? How the hell… alright. I guess that explains why he’s dressed like he’s from another century. Must be a tour guide or something.

“Can I get a glass of water before my tour?”

“I don’t think he’s very busy right now. Not sure he’s had many visitors today. You can probably see him if you want.”

“Who are we talking about?”

“George Washington. The general and President. You’re not from around here, are you?”

Washington? The George Washington? Can’t believe it! My God! Oh my God! Stomach’s doing a somersault! How in the hell… I don’t know. But this fellow is right in front of me and saying I’m about to meet George Washington, who I've idolized since I could read. I wonder if I can confirm the cherry tree story.
M. B. Zucker 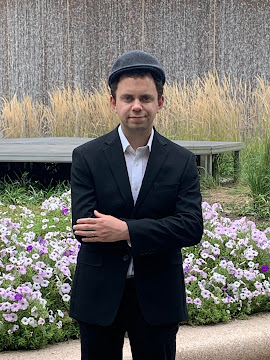 M. B. Zucker has been interested in storytelling for as long as he can remember. He
discovered his love of history at fifteen and studied Dwight Eisenhower for over ten years. Mr. Zucker earned his B.A. at Occidental College and his J.D. at Case Western Reserve University School of Law. He lives in Virginia with his wife.
You can connect with M. B. Zucker via these platforms - 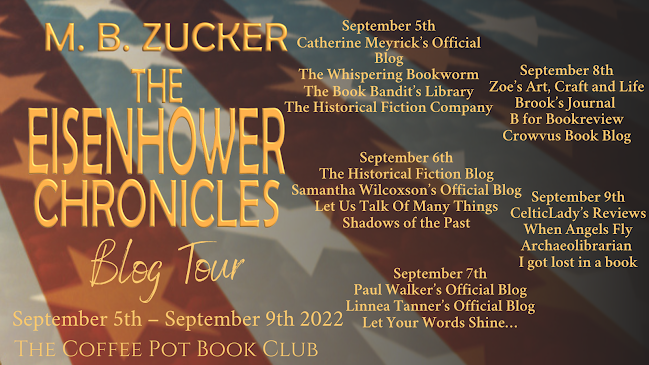 Posted by CraftygasheadZo at 08:00 No comments: