Today I'm welcoming Laurence O'Bryan and his book - The Sign of the Blood (A Dangerous Emperor Book One) - to my blog as part of the blog tour hosted by The Coffee Pot Book Club (founded by Mary Anne Yarde). 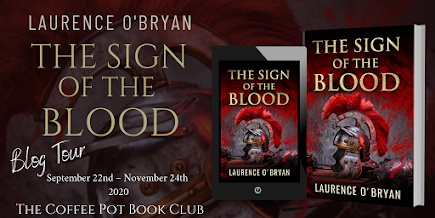 I'm delighted to bring you all a review, but first I will introduce the book. 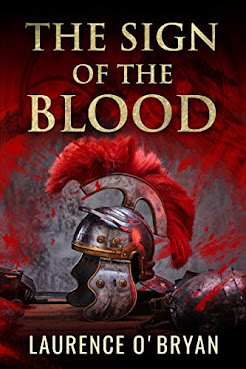 The first Christian emperor faces ruthless enemies on his journey to power.

Cool mist settles over the legion advancing toward the Persian army. Constantine, the son of an emperor, the Roman officer leading the attack, tells his men to halt - something is wrong.

Before long, the battle rages. He frees a slave named Juliana. She is half Persian and half Roman. As they are pursued to Britannia over land and sea, he learns that she can see the future - his future.

It is 306A.D., long before Constantine the Great converted to Christianity and became the first Christian emperor.

To ensure he survives, he must eliminate his enemies. But who must die first? The priestess, Sybellina, who joined them in Rome and practices dark and seductive magic? Or the brutal legion commanders who surround his father? Or, as Juliana suspects, are those who want him dead even closer?

A gripping historical novel about Constantine’s bloody rise to power, the woman who helped him, and the real reason he supported a persecuted Christian minority, a decision which changed the world into the one we know.

Firstly, I have to admit I do not know an awful a lot about Constantine the Great, and indeed this period of history, so I was a little apprehensive that this era would be too foreign to me. I need not have worried, for Mr O’Bryan is a competent tour guide as well as an incredibly gifted author.

Constantine is a young man who is desperate to break free from the chains that hold him back from reaching his true potential. In a politically volatile world, Constantine must find his place in it. Unlike many of his counterparts, Constantine abhors cruelty, and he cannot turn away from it when he sees it, which I think gives his character not only honour but also credibility. I thought Mr O’Bryan’s depiction of Constantine was fabulous.

One of the characters that I really adored is Juliana. Juliana’s story is incredibly moving, and also very realistic in the telling. I thought Juliana brought a great deal to this book, and I enjoyed learning about her.

This is a book that is very battle heavy which is normally not my cup of tea, but actually, the way Mr O’Bryan has written these scenes make them very cinematic in the telling. It was almost like I was watching a movie rather than reading a book.

The Sign of the Blood is a meticulously researched novel that brings back to life the ancient world. I thought it was fabulous. 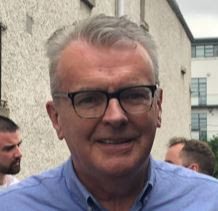 I spent twenty years studying Roman history and reading every book about Constantine the Great I could find. I also visited numerous sites where my Roman series is set, including in London, where I lived for ten years, Jerusalem, Rome, Trier, York, Nicomedia and Istanbul.

The first novel in the series, The Sign of The Blood, is about the rise to power of Constantine the Great, the women who helped him, and the others who wanted him dead.

The Road to The Bridge, the second novel in the series, is about the lead up to the battle of the Milvian Bridge in 312 A.D. and how Constantine the Great lured Maxentius, his rival emperor, out of Rome.

The third novel in the series, The Cursed City, is about the dedication of New Rome, later to be called Constantinople, and how Constantine fell out with his wife, Fausta, and his son Crispus, and what he had to do to survive.

There are five novels in the puzzle series, The Istanbul Puzzle, The Jerusalem Puzzle, The Manhattan Puzzle, The Nuremberg Puzzle and The Cairo Puzzle.

There is a story link from The Istanbul Puzzle to The Cursed City.

My books have:
* Achieved #1 ranking on Amazon,
* Been translated into 10 languages.

My roots go back to a small estate deep in the Mountains of Mourne near the Silent Valley, in County Down, Northern Ireland.

I went to school in Dublin, drank way too much, studied English and history, then business, then IT at Oxford University.

My research has taken me all over the world, from San Francisco to deep in the Muslim world. There are secrets everywhere. I enjoy writing about them. I hope you enjoy reading about them.

You can connect with Laurence O'Bryan via - 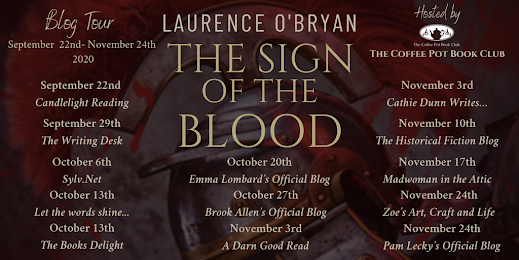 I hope you will check out the book.

Email ThisBlogThis!Share to TwitterShare to FacebookShare to Pinterest
Labels: ancient Rome, historical fiction, The Coffee Pot Book Club, The Sign of the Blood