Welcoming Anas Hamshari and Caroline Snodgress and their book - Anke: The Beginning - to my blog

Today I'm welcoming Anas Hamshari and Caroline Snodgress and their book - Anke: The Beginning - to my blog as part of the blog tour hosted by The Coffee Pot Book Club (founded by Mary Anne Yarde). 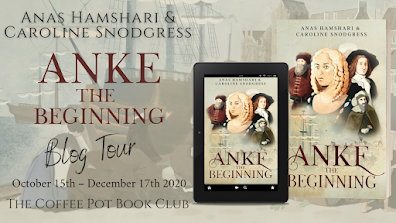 I'm delighted to be able to share an excerpt with you all, but first I will introduce the book. 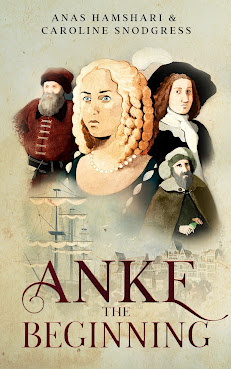 Living in the city of Mechelen, just south of once-prosperous Antwerp, in the aftermath of the Thirty Years’ War, Anke Verhaegen, an ambitious nineteen-year-old, is determined to make the most of her life.

When her brother Johan suggests crossing the Atlantic to New Netherland, Anke knows this is her destiny. Together, the two set about attempting to secure passage across the sea.
Before long, their plans are in motion, and hopes are high. Yet, with vengeful enemies, secrecy, and danger on the high sea waiting to be faced, will Anke really be able to secure a better life for herself?

I basked in the commotion, drinking in the mixture of accents and languages like rich wine. Some were more familiar than others, but the less familiar, the better, in my opinion. There was something so dreary about a homogenous culture. What fun was speech or dress or industry if there was no variety? If I lived in the north, I could have stood at the ports all day long, watching the ships come in, just to hear the strange tongues and watch the way the cultures began to blend.

“See anything you like, miss?” It was a Spaniard, with a charming grin and languid posture, gesturing down at whatever it was that he was selling, having mistaken my interest for that of a customer. He had an impressive mustache, with a little slip of a beard beneath it, both of which, like the curls that fell from his hat, was a rich black, like the night sky in the depths of winter.

“Perhaps,” I replied with a teasing grin.

“Oh, believe me,” a Frenchman appeared beside his fellow merchant, slipping out of the crowd like a cat, “you don’t want to buy what he’s selling. A lady such as yourself can do better.”

“Oh, really?” I asked, turning my attention to him.

“Yes, yes, of course—with me!” He stuck his chest out as though he thought himself very important. His ruff seemed to agree with him on that matter; it was so grand it was almost aristocratic. Though, his clothes looked well-worn, fraying at the seams.

“Of course, of course. So what can you offer me?” I always enjoyed this. Even if I could not buy anything, I could always haggle, could make them work at it, and watch how they strove to overcome.

“Oh, don’t entertain her, Armand.” Another man appeared, a Flamand this time, and one that I had seen before, with watery blue eyes and hair the color of sand. He looked me up and down and shook his head. “This is the same one who was here last week. She is only teasing you.”

“Just because you failed does not mean I will do the same,” the Spaniard said.

“As if you ever had a chance,” the Frenchman—Armand, apparently—retorted.

“Surely a lady such as yourself,” the Spaniard addressed me, “could not resist such a beautiful fabric.” He fetched a bolt of silk and held it out for my appraisal.

I hummed approvingly but said nothing.

“You are looking for something a bit more striking?” He held up another piece of fabric, this one, a deep shade of pink, like watered-down wine. “Cochineal. Eh? And—” he lay a blue bit of cloth over his forearm, urging me to touch it, “Indigo, as well.”

“See? She cannot resist. She is too clever to pass on an offer such as this.”

Armand shook his head. “If she were clever, then she would know better.” He turned to me. “Summer does not last forever, you know. Why waste your time on these fabrics, when you could have furs, so warm and luxurious that you would hardly notice the season’s end?”

The Spaniard seemed as though he was going to speak, stepping forward to place himself in equal footing with Armand. They quietly shoved each other with their elbows, fighting for the more prominent position. 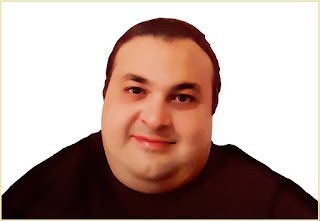 You can connect with Anas Hamshari via -

Caroline Snodgress is a first-time author but a long-time writer and ghostwriter. As an Echols Scholar at the University of Virginia, she is planning to double major in English and History, and is thoroughly enjoying taking as many fiction writing classes as she can fit into her schedule. When not in Charlottesville, she lives with her family just outside of Richmond, reading eighteenth- and nineteenth-century literature and watching plenty of period dramas in her spare time.

You can connect with Caroline Snodgress via - 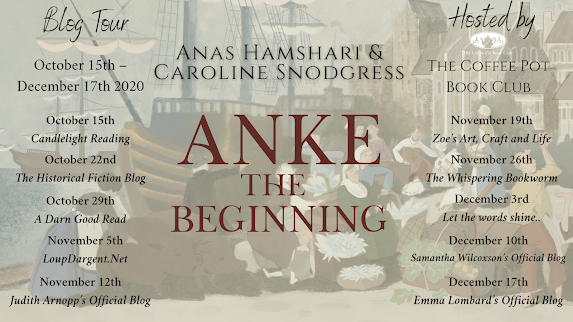 I hope you check out Anas and Caroline's work.

Such a fabulous excerpt!

Thank you so much, Zoe, for hosting today's tour stop!