Welcoming Holly Bush and her book - The Professor's Lady - to my blog.

Today I'm welcoming Holly Bush and her book - The Professor's Lady (The Thompsons of Locust Street, Book 3) - to my blog as part of the blog tour hosted by The Coffee Pot Book Club (founded by Mary Anne Yarde) 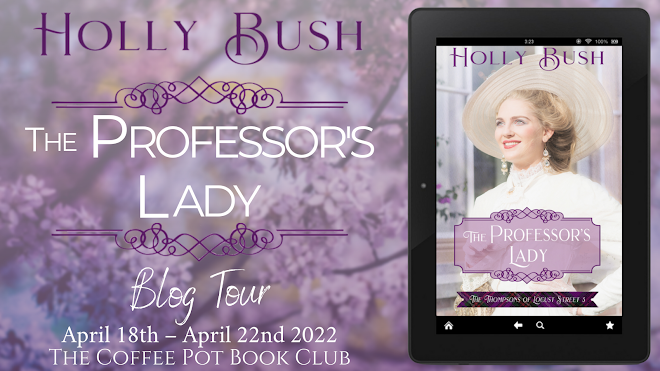 I am delighted to share an excerpt with you all, but first I will introduce the book. 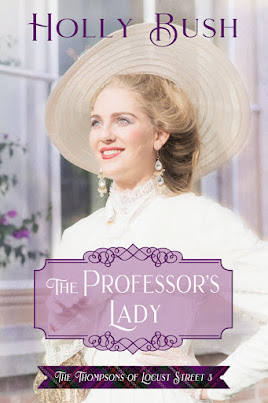 1870 Kirsty Thompson is determined to begin her own business bringing beloved Scottish fabrics and yarns to Philadelphia but first she must meet the men and women who weave the plaids and spin the wool. How will she ever escape her protective older siblings and sail to Scotland?

Albert Watson is a medical doctor focusing on research, especially that of Joseph Lister and his sterilization techniques. He speaks at universities in America and in England while visiting his London relatives. As he prepares to sail for just such an engagement, Kirsty Thompson boards his ship to beg him to take her with him. What’s a gentleman to do? Albert cancels his trip across the ocean to escort Miss Thompson back to Philadelphia and finds there is danger afoot for her and her family.

Soon he comes to realize there is also danger for his heart, even for a man who rarely pulls his nose from a medical journal. He finds himself unable to put Miss Kirsty Thompson out of his thoughts, where they belonged, because certainly a beautiful, ambitious, and charming young woman could have no interest in him. Or could she?

You can purchase the book via -

Muireall Thompson woke with a start from where she’d been dozing in the parlor of the Thompson home at 75 Locust Street, Philadelphia. “Has anything happened?”

“Nothing,” James said. His wife, Lucinda, was upstairs in one of the beds trying to sleep, although he doubted she would. Nothing had happened as of yet, he thought, but James was sick with fear that the men after their family, especially after his younger brother, had taken Kirsty just like they’d taken Elspeth two years ago to hold her for ransom. There but by the grace of God she’d been rescued before anyone had harmed her more than could be healed. And in the end, Elspeth, always quiet and seemingly fragile, had killed a man with a knife as he beat her with his fists. He glanced at her as she came through the door.

“Mrs. McClintok is making some sweet rolls for us, and I’ve got tea,” Elspeth said as she carried the tea tray awkwardly on her swollen belly. Her husband, Alexander, jumped to his feet.

Tears rolled down her cheeks. “I can’t, Alexander! I can’t sit still for one more minute worrying about Kirsty. I have to do something!”

“It’s after four in the morning, Elspeth,” James said. “We don’t need tea.”

“I’ll have tea,” Muireall said. “Where is Payden?”

“In the kitchen with Mrs. McClintok and Robbie, sound asleep on his arms at the table. I tried to get him to go to his room, but he will not listen to me,” Elspeth said as her lip trembled.

“Elspeth, darling,” Alexander led her to the settee, “please sit. You are upsetting yourself.”

She looked at him and wobbled a smile. “I am being silly, am I not? But I just can’t help myself.”

“Is this what I have to look forward to?” James asked.

Muireall arched a brow, and their great-aunt Murdoch’s eyes flew open. “What are you saying, boy?”

He shook his head and returned to peering out between the curtains to the street. “Someone is coming.”

Alexander jumped to his feet and followed James to the front door. “Could you see who it was?” he asked.

“It looked like one of those telegram messengers,” James said.

The brass door knocker clattered, and James pulled the door open quickly, yanked the man inside, and shoved him against the wall.

“Hey,” the man yelled, losing his cap. “Whatcha doing? Leave me be!”

“Where is she?” James growled and tightened his hold on the man’s neck.

“Don’t know what you’re talking about! Just delivering a message to 75 Locust Street!”

“Let him talk, James,” Alexander said and held up the cap he’d picked up from the floor. “It says ‘Bernardo’s Messenger Service’ on this card on his hat.”

James released the man and stepped back. “What are you doing here? Who sent you?”

The man grabbed his cap from Alexander. “I’m here because my boss paid me extra to deliver the message in my satchel in the middle of the night. Special delivery from New York City.” He looked up with wide eyes at Alexander, who was aiming a pistol at him.

“Here,” the man said and handed over the recognizable telegram envelope to James.

“He might be telling the truth.” Alexander lowered his weapon. Muireall slipped into the entranceway, coins in her hand.

“Here is a tip for your trouble.”

James opened the door, and the man ran down the steps, glancing over his shoulder as he did. He handed Muireall the letter. “It’s addressed to you.”

Muireall took the telegram and went into the parlor. She slit the envelope and pulled out two pieces of paper. She unfolded one and plopped down on the seat behind her, her hand over her mouth.

Elspeth burst into tears, and James dropped down to his haunches in front of Aunt Murdoch. “Where is she?” he asked.

Muireall scanned the letter. “In New York. At a hotel. With Albert Watson.”

“Albert? What is she doing with Albert?” Alexander asked.

Couldn’t get off the boat. I am fine, with Mr. Watson in NYC hotel, someone tried to kill me, be home soon.

“James,” Lucinda said from the doorway.

“And then I’m going to kill Watson!” James said.

Muireall held up her hand:

Miss Thompson safe but not out of danger. Escorting her home on the 16th.

“He is the one that took her into dinner on the night of your party, isn’t he, Alexander?” Muireall asked.

“He is, and although this is highly unusual, Albert is to be trusted. He’ll guard Kirsty with his life if necessary.”

“What could possibly be the reason she got on a boat?” Elspeth asked.

Lucinda walked into the room and sat down on the arm of Aunt Murdoch’s chair. “I believe I know. She told me she wants to visit Scotland to meet the people she’s been corresponding with about importing wool. She knows that Mr. Watson travels back and forth to England because he still has family there and for his work in medical research. She was going to ask him to escort her and a companion on a voyage to Scotland since he would be traveling there anyway.”

“That is absurd! Albert would never agree to escort her,” Alexander said.

“But it does sound so much like our dear Kirsty,” Elspeth said and patted her eyes.

“How did she know what ship he would be on?” Muireall asked.

“That is my fault,” Lucinda said. “My aunt’s stepson has been meeting with Mr. Watson and getting help from him with some advanced studies. Kirsty was at our house the day Geoffrey told us of Mr. Watson’s plans to sail on the Maybelle on the fourteenth.”

“Good God, that girl will be the death of me,” Aunt Murdoch said. “And she’s going to have to marry this Watson person after this escapade.”

“We must not jump to conclusions, Aunt,” Muireall said.

“Be realistic, Muireall. Kirsty, our Kirsty, sleeping in a room alone with a handsome man—and I think he was, if I remember correctly. She’d be . . . energetic,” Aunt said.

Alexander looked away, and James gritted his teeth.

“If he has touched her, I’ll kill him, regardless of how energetic she was,” James growled.

“I fear this is my fault.” Lucinda turned to Muireall. “Of course, I discouraged her plans before that day with Geoffrey, but I never in my wildest dreams thought she would board the Maybelle.”

“Kirsty can be . . . unpredictable, Lucinda. You could not have prevented this.”

“Also, energetic,” James said and shook his head. “I’m going to kill her.”

Payden McTavish Thompson, the Tenth Earl of Taviston, moved from the door where he’d been standing, listening to the telegrams Muireall read. “But more than any of it, they are back. Plowman is back, and we must be on our guard.”
Holly Bush 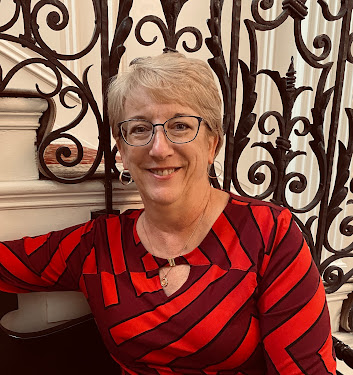 Holly Bush writes historical romance set in the U.S.in the late 1800’s, in Victorian England, and an occasional Women’s Fiction title. Her books are described as emotional, with heartfelt, sexy romance. She makes her home with her husband in Lancaster County, Pennsylvania. Connect with Holly at www.hollybushbooks.com and on Twitter @hollybushbooks and on Facebook at Holly Bush

You can connect with Holly Bush via these platforms - Thank you so much for hosting today's tour stop for The Professor’s Lady.

Thanks for having me on your blog!