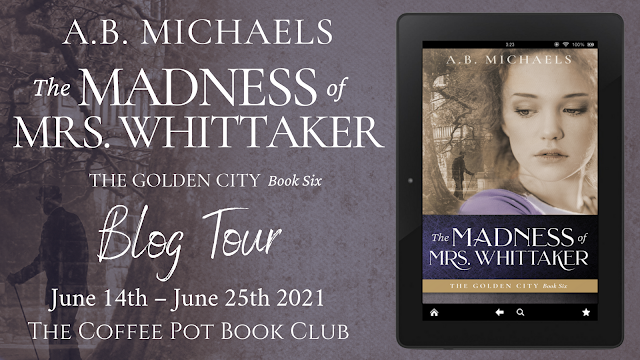 The Madness of Mrs Whittaker 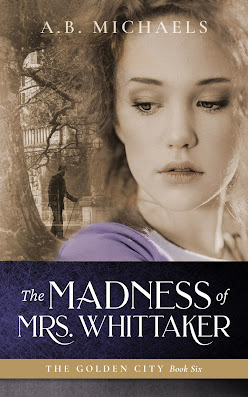 While exploring the remote possibility of contacting her dead husband through a spirit medium, a young widow is pronounced insane and committed to an asylum against her will. As she struggles to escape the nightmare she’s been thrust into, she is stripped of everything she holds dear, including her identity and her reason to live. The fight to reclaim what is rightfully hers will test every aspect of her being, up to and including her sanity. Is she up to the task, or has her grip on reality already slipped away?

Book Six of The Golden City series, The Madness of Mrs. Whittaker explores two major forces of early twentieth century America: the religious movement called Spiritualism and treatment of the mentally ill. Like all of A.B. Michaels’ novels, it is a stand-alone read. 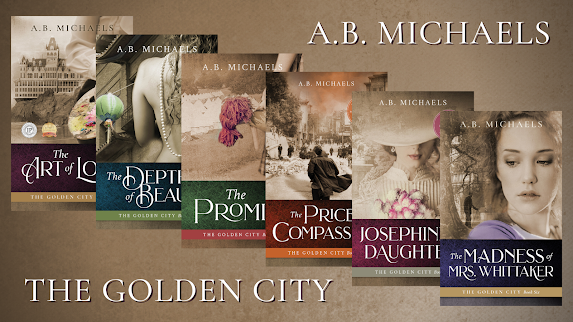 Excerpt from The Madness of Mrs. Whittaker – partial Chapter 12

Mae is attending her third “mourning circle,” which we would call a séance.

The room’s meager light petered out, leaving only shadows. Pasiphae used her mesmerizing skills on Mrs. Springvale to once more lead her into a trance. Mae sat between Minos and the frail widow Sterope. Their hands could not be more different. His was meaty and moist, rubbing her palm inappropriately and making her skin crawl, while the old woman’s was tiny and birdlike, almost a claw. Mae felt as if she could easily crush it, were she to squeeze too hard. They both contrasted with the memory of Andre’s hand--strong, warm, dry--and she longed to feel it again.

Then it began: The wisp of a breeze across her arm. And several eerily quiet moments later, the telltale bump of the table. It was more pronounced this time. All hands were held above the surface, which had to mean that someone was causing the table to move with their leg or foot. It had to mean that. Because if she believed, as Claire did, that these were signs of spirits moving among them, then she would have to accept the idea that her father had somehow reached for her beyond the grave. The thought sent her nerves skittering and she felt a familiar jolt of panic, a powerful urge to jump up and run out of the room. She focused on remaining seated, calming herself with the mantra It’s only a game, just a parlor game.

A crash sounded from the far side of the room, as if something been slammed on the floor. At the same moment a figure--she had no idea what--swept over their heads; she could feel it displacing the air, a barely discernable shadow that crossed her field of vision and was gone.

“Ohhhh,” Sterope moaned, her skeletal hand surprisingly strong as it gripped hers. What is going on here? Mae wondered frantically. What is happening?

Her thoughts were interrupted by a strange sound emanating from Mrs. Springvale. She was speaking, but not in her normal voice--not even in the monotone she had used during the first séance. A foreign language spilled from her lips, a tongue Mae had never heard before. It had traces of Gaelic mixed with something else--could it be Russian?

Then the medium switched to her own flat voice. “Hermes, I call upon you. Help my sisters and brothers reach the ones they love. Speak so that they may understand you.” Her head began to rock from side to side before abruptly stopping. “I am here,” she said in a low, guttural manner. “I bring news.”

The flat voice: “What news?”

Mae felt Sterope’s brittle hand squeeze hers again. Through the gloom she could barely make out the woman’s face. It was tilted toward the ceiling and her eyes were closed. But she was wearing the most beatific smile; it transformed her from an old, nearly spent crone to a young bride full of love. Was Mrs. Springvale really a fraud? If she was, how could she bring such joy to others?

It was Claire’s turn to react, which she did by raising her hands up high, even though they were still clasped with those on either side of her. “Yes, Papa,” she said in a little girl voice.

Silence again, but it didn’t take long before Mae noticed the faintest sound--one she’d heard before but wasn’t sure if it was real. It was the soft but unmistakable drone of insects. “Do you hear that?” she whispered to Minos.

It wasn’t just her imagination, then. Mae braced for what was to come and soon Hermes, through Mrs. Springvale, spoke once more. He didn’t specifically address Mae, but she had no doubt that he was talking to her.

Mae began shaking so badly that she abruptly let go of the hands she was holding. She barely heard Pasiphae signal the end of the session and begin to dismiss the members one by one. Soon, only Mae and Mrs. Springvale were left, and by the light of the small lamp, which once again gave off a soft glow, she could see that the medium’s face was etched with worry.

“Are you all right?” Mrs. Springvale asked.

Mae let out a humorless bark. “All right? How will I ever be all right?”

A native of California, A.B. Michaels holds masters’ degrees in history (UCLA) and broadcasting (San Francisco State University). After working for many years as a promotional writer and editor, she turned to writing fiction, which is the hardest thing she's ever done besides raise two boys. She lives with her husband and two spoiled dogs in Boise, Idaho, where she is often distracted by playing darts and bocce and trying to hit a golf ball more than fifty yards. Reading, quilt-making and travel figure into the mix as well, leading her to hope that sometime soon, someone invents a 25+ hour day.

You can connect with A B Michaels via these platforms - 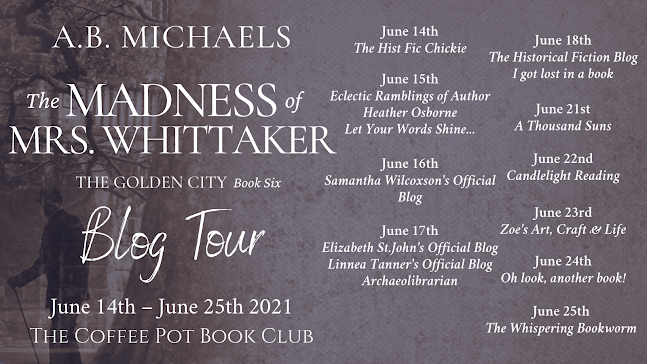 Thank you very much for hosting my latest book--I hope readers are intrigued by Mae's experience and have a greater appreciation of the freedoms we enjoy today!