Welcoming Christine Hancock and her book Bright Helm to my blog

Today I'm welcoming Christine Hancock and her book - Bright Helm (The Byrhtnoth Chronicles: Book 4) - to my blog as part of the blog tour hosted by The Coffee Pot Book Club (founded by Mary Anne Yarde). 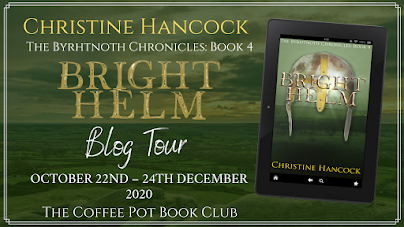 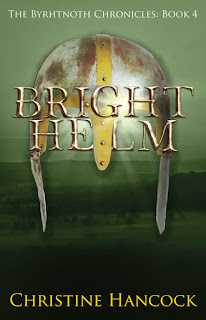 Separated by anger and unanswered questions, Byrhtnoth and Saewynn are brought together by a tragic death.

Re-united, they set out on an epic voyage to discover the final truth about his father.

The journey takes them far to the north, to Orkney, swathed in the mists of treachery, and to Dublin’s slave markets where Byrhtnoth faces a fateful decision.

How far will he go, to save those he cares for?

I stared down at the oar. It felt like a part of my body, and I hated it with every fibre of my being. I recognised every mark and indentation and knew that if I lifted my hands, the image would remain imprinted on the wood, my blood and sweat soaked into the salt caked surface. What would it be like to be chained to it, to suffer this view every day, for weeks, months, perhaps years until death released you from its tyranny? I must not think of slavery. I should be glad that I could stop at any time. Not yet, although I hoped it would be soon.

I lifted my head, and my neck screamed a protest. At least I could look at Saewynn. Sometimes I caught her watching me, and I would smile and attempt to cheer her. Now she looked past me, scanning the sea ahead. She was tired. I knew how much strength it took to control the steering oar, and she had spent days at it. How many? I had lost count. She could hide her distress from the others, but not from me. When I realised her hands had been injured from rescuing Leif, I had stopped her, but she had continued the instant they had healed. It was her job, she said, while the rest of us rowed. I prayed that we would soon find somewhere suitable to stop.

It had become more challenging to find a beach to shelter us at night. The islands were numerous and more thickly inhabited. Every likely beach had a farm perched above it, most with a boat pulled up on the sand. Earlier we had passed the island of Iona and Leif had pointed out the burnt remains of the monastery. Only a few stones marked the abandoned site. Perhaps we should have stopped there, but it was too exposed, and foolishly I wanted to carry on. Tomorrow we might attempt the crossing to Ireland, Leif said, where that land was closest. We needed a good night’s rest. Leif already slept. He found it difficult to settle at night, his injuries pained him when he moved. At least they were healing.

My father spoke from the bow. He had spotted a ship. I mumbled an instruction to Thurstan, and we slowed the oars.

“That can’t be the Seal, can it?” Saewynn stood, squinting against the low sun. “It’s a long way away. What do you think?” she asked, looking at me. Gratefully, I pulled in my oar, hearing the rattle as Thurstan did the same, and forced my cramped fingers to loosen their grip. I turned, careful not to rock the boat. The ship was difficult to see, silhouetted against the bright sky.

“It’s heading north,” I said, “Seal will be far away, may have reached Dublin by now. Why would she appear here?”

“Perhaps they weren’t heading for Ireland after all,” said Saewynn, sitting down and taking control of the boat with a grimace. I gave her a sympathetic smile and pain shot through my fingers as I tried to straighten them. “What do you think, Thurstan?”

“It’s the right shape. Maybe the raiders’ home is around here. It’s on its own though, shouldn’t there be a second ship, the one they used in the attack?”

“That makes it more likely that it’s in home waters. If we could identify its home port…” I looked around. There was a small island not far away. If we kept our vessel in line with it, the other ship might not spot us. “Let’s get a bit closer.”

“Are you sure?” asked Wulfstan.

“It’s worth the risk,” I told him. “It’s a long way away and even if they spot us, why would they be troubled by an innocent fishing vessel.” I took hold of the oar with renewed energy. “Set a course towards it,” I told Saewynn, “not direct, just close enough to identify it.” She nodded. “Keep us in the shelter of that island.” I pointed towards it.

“Yes, my lord,” she said. I dug my oar into the water, noticing that the waves were increasing. It would make it easier to hide.

Slowly, the ship grew closer. It was heading away, and Saewynn had pointed our boat ahead of it, so we approached from behind, and to the side. We had no chance of catching it, but that wasn’t what I wanted. If it were the Seal, it was more important to discover its destination.

“Looks like it’s heading towards Iona,” said Byrhthelm. I glanced over my shoulder to see Wulfstan clutching the side of the boat and staring intently towards the ship.

He shook his head. “I don’t think it is the Seal. I can’t see the bow from this angle, but the stern looks wrong. Byrhthelm shrugged. Of course, he had never seen our ship.

“What do you think,” I asked Saewynn.

“I think he’s right. It looks similar from a distance, but closer, it is completely different. Shall I turn back?”

“Make it look as if we planned the move.” She scowled at me, and I bent my back, increasing my speed to help make the turn. Silently I groaned. How much time had we wasted on my foolish idea? I glanced towards Leif, still asleep. He would have given better advice or at least identified the ship earlier. I was surprised he hadn’t woken. The sea was getting rougher, the small boat bouncing over the waves. Thurstan missed his stroke, and our progress stuttered. Something rumbled, and I looked up, not a cloud in sight and still no wind. Not a storm then.

The unknown ship was turning. Wulfstan had been right; the prow took the shape of a snake. Men moved on the deck, and the vessel swung until the snake’s head pointed towards us. I had made a big mistake.

“Head for the island,” I told Saewynn. “They’ve spotted us. We need to hide.” She took a swift look then stared fixedly ahead. Thurstan heard my comment, and we both increased the rate. “Byrhthelm, Wulfstan, weapons, in case we have to fight.”

As we approached the island, I knew it would not serve. What we could see, and there were several separate islands, was rocky, with no place to hide, or even land, with cliffs falling sheer to the water. The ship was closer.

“South, another island, larger, more place to hide.” My breath was short from pulling the oars. The water churned and waves broke in the gap between the islands. We battled our way through, the boat tossing and spinning. Close to the new island, it grew calm. The pursuing ship paused, turned away.

“Keep close to the coast. They’ve given up,” I shouted, my words almost drowned by the roar I had noticed earlier. I scanned the rugged coast; still, no place to land. We rowed desperately - nowhere to hide. The ship completed its turn. Far from giving up, it now flew towards us; the oars beating a creamy wake.

“A gap.” My father’s shout fought against the deafening noise. “Rough. Shall we take it?”

I looked up at Saewynn, she surveyed the way ahead, unsure. I glanced over my shoulder, foaming water, but beyond, freedom. I nodded, and she wrenched the steering oar. The boat tilted, and I stared into the dark water a hand’s length away, then it righted, and we were among the turbulent breakers. Rowing was futile. We raised the oars, hung on and let the water take us.

Leif hit the side of the boat and woke with a shout.

“What’s happening?” He struggled into a sitting position, clutching his injured arm. He looked around, and a look of horror crossed his face. “Why did you bring us here?”

A wave broke over the boat, soaking everyone. I started to row, hoping Saewynn would pick the best route. “A ship chased us. This way seemed safe.” I heaved on the oar without effect.

“Safe?” He attempted to spit, then thought better of it. “We’re dead.” He pointed ahead. I twisted in my seat and stared into the jaws of hell. A great whirlpool lay directly in our path. Was it even worth attempting to avoid it? I slumped over the oar, shoulders screaming in pain, I could do no more. 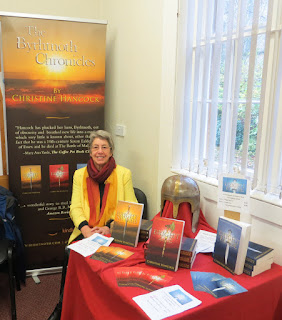 Christine Hancock was born in Essex and moved to Rugby, Warwickshire when she married. She and her husband have two sons and two lovely grandchildren.

She is a long-term family historian, leader of the local history group and town guide.
Christine had never thought of becoming an author - She just wanted to write about some of her ancestors. In 2013 she joined a writing class. The class turned out to be about writing fiction. Before she knew it, she was writing a novel.

Byrhtnoth was a real warrior who died in the 991 Battle of Maldon, made famous by the Anglo-Saxon poem of that name. Growing up in Essex, Christine visited Maldon often, and attended the 1000 year anniversary of the battle in 1991.

She wanted to find out what made Byrhtnoth such a famous warrior.

She finished the book but discovered it had become a series - how long, she has yet to find out.

You can connect with Christine Hancock via - 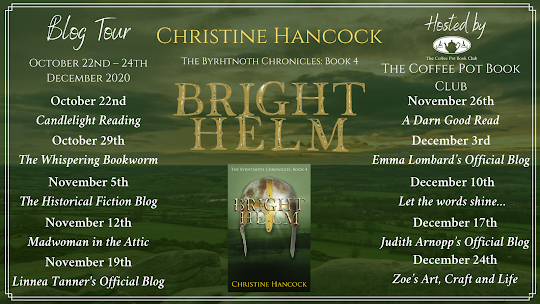 Such a fabulous excerpt.

Thank you so much for hosting today's tour stop.