Well that was ....bland. The Nearly team.

So yesterday I went to watch my beloved Bristol Rovers. It was a welcome afternoon out following my horrendous week health wise. The sun was shining. I got to see many of my Gashead friends. So it was enjoyable until the game started. 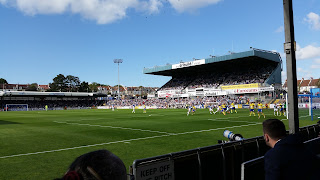 I'll confess to being a blue tinter. A happy clapper. But even for me, the game was a bit bland. Boring. Both teams huffed and puffed. But Accrington Stanley stayed strong. Were organised. And we just couldn't break them down. They scored. We didn't. End of.

Darrell stated in his post match interview that we were the 'nearly team'. I can't disagree with that.

I'm staying 100% behind Darrell and the boys. It is way too soon to start panicking or calling for drastic measures. Do Gasheads really feel we will be top 7? I know that's what we have to aim for, but realistically I think we'll finish in the middle somewhere. We'll become one of those teams that won't have anything to play for at the end of the season. In my opinion anyway.

That winning habit gained last season was always going to be difficult to replicate. We will witness more losses that's for sure. But ultimately I do believe we will win enough to be ok. I want us to up there, of course, but I just feel we need to have a season or so to settle back into the league. Then go for promotion when we are stronger squad-wise, Darrell has a chance to really get his teeth into this league and perhaps we've a little more money.

You summed up the game perfectly, Zoe, not the most exciting of games, to watch. I think we still have a chance of finishing in the playoffs though. If the red card wasn't shown at the last match and the penalty we deserved was given, we may have gone on to win. With three extra points we would be around the playoff area now. Fingers crossed the team can put the last game behind them and get back to a winning streak. UTG xx