Welcoming Linnea Tanner and her book - Skull's Vengeance - to my blog 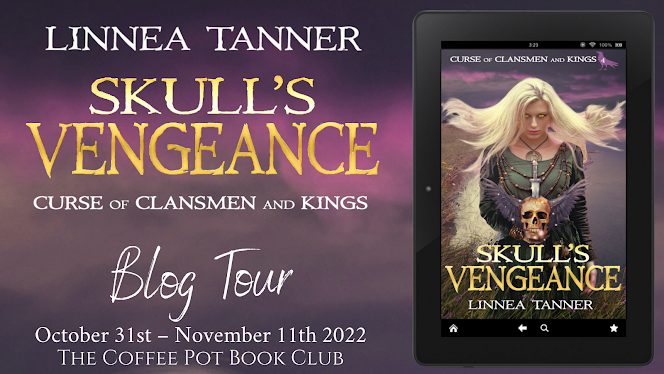 I'm delighted to share an excerpt with you all, but first I will introduce the book.
Skull's Vengeance 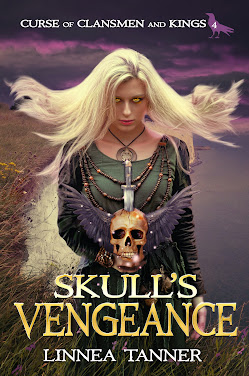 A Celtic warrior queen must do the impossible—defeat her sorcerer half-brother and claim the throne. But to do so, she must learn how to strike vengeance from her father’s skull.

AS FORETOLD BY HER FATHER in a vision, Catrin has become a battle-hardened warrior after her trials in the Roman legion and gladiatorial games. She must return to Britannia and pull the cursed dagger out of the serpent's stone to fulfill her destiny. Only then can she unleash the vengeance from the ancient druids to destroy her evil half-brother, the powerful sorcerer, King Marrock. Always two steps ahead and seemingly unstoppable, Marrock can summon destructive natural forces to crush any rival trying to stop him and has charged his deadliest assassin to bring back Catrin's head.

To have the slightest chance of beating Marrock, Catrin must forge alliances with former enemies, but she needs someone she can trust. Her only option is to seek military aid from Marcellus—her secret Roman husband. They rekindle their burning passion, but he is playing a deadly game in the political firestorm of the Julio-Claudian dynasty to support Catrin's cause.

Ultimately, in order to defeat Marrock, Catrin must align herself with a dark druidess and learn how to summon forces from skulls to exact vengeance. But can she and Marcellu outmanoeuvre political enemies from Rome and Britannia in their quest to vanquish Marrock?

Acclaim for other books in the Curse of Clansmen and Kings series:

"The requisite fantasy elements of magic and mystery abound...Tanner also does an admirable job weaving in the politics and mythology of a bygone people." —Kirkus

"Part fantasy, part historical fiction, Linnea Tanner has woven together a wonderful tale of romance, intrigue, mystery, and legend to create an entertaining and complex story." —The International Review of Books

Buy Links for Books from Curse of Clansmen and Kings series: Now for the excerpt -The sun was sitting high in the sky when they reached a small clearing in the forest. After a few weeks of living in the stuffy hut, the air in the forest felt fresher than before. Ulf breathed in the rich forest aroma of damp ground and green leaves, feeling his anger being calmed, as if Freya had placed a soothing hand on his head. Even the sounds seem louder, he thought as he heard the birds singing in the trees. There were twigs snapping in the distance, a constant reminder they were not alone in this old forest.

“Let’s rest here,” Ulf said. He was tired and the pain in his side was making it difficult to carry on. His mood was in contrast to the sunny weather as he sat down and tried to figure out what to do. He didn’t have much of a plan, didn’t even know where to go. There was Thorgilsstad, but his uncle had always told him to stay away from there. But Ulf didn’t know of any other jarls.

Vidar, on the other hand, was smiling. Ulf guessed Vidar felt free, but he didn’t understand why Vidar had waited so long to kill the old man.

Vidar looked at him, confused at first, but then he understood the question. He replied by pointing at Ulf.

“You waited for me?” This made no sense. How did Vidar know that he would be there?

Vidar shrugged and then nodded. A yes and no answer.

“How did you know that I would not kill you instead? Thralls who kill their owners must be killed themselves. Those are the rules of our land.”

Vidar only smiled and shrugged.

Somehow, he knew. Ulf felt a bit uneasy and it was not because of the pain. It felt like there was more to this silent boy with his large hands. Before Ulf could say anything else, he saw Vidar scanning the trees at the other side of the clearing. The smile disappeared from Vidar’s face, replaced by a snarl that reminded Ulf of a dog.

“What is it?” Ulf asked, realizing the birds had gone quiet. He got back to his feet and took Olaf’s axe from his belt.

In response to his question, a man jumped out of the undergrowth. Ulf pushed Vidar behind him and held the axe ready, though he wasn’t sure what he was going to do. The man had a long hunting spear, which he now pointed at Ulf and Vidar. He looked as surprised to see them as they were to see him.

“Who are you?” he asked. He had a strong voice which spoke of confidence.

“Nobody important,” Ulf replied. “Who are you?”

The man smiled at the response. He was the same height as Ulf, but sturdier. He had a round face with light hair, braided and tied at the back. His beard, the same colour as his hair, also had a thick braid and went to the top of his chest. Ulf could tell by the many arm-rings he wore and his bunched-up shoulder muscles that the man was an experienced warrior.

“My name is Snorri Thorgilsson,” he said with a broad smile as he stood up straight and stopped pointing the spear at them. He must have decided they were no threat.

“Thorgilsson? As in Jarl Thorgils?” Ulf should have guessed he was someone important by the quality of the clothes he was wearing.

“Yes, I am the son of the jarl. You mean to kill me.” He was smiling at the thought. Even Ulf doubted he could kill the warrior, especially with his side still hurting.

“What?” Ulf turned to look at Vidar but kept an eye on the warrior in front of them.

Vidar pointed to the trees as a large brown bear walked into the clearing, behind the man who called himself Snorri. But Snorri hadn’t noticed the bear and must have thought Vidar was pointing at him.

“What does he want?” Snorri asked Ulf as the bear crept closer. Ulf had never seen a bear as large as this one.

“Behind you,” Ulf answered and was shocked to see Snorri laugh.
“Those are my men, nothing to worry about.”
“There are no men behind you.”
Linnea Tanner 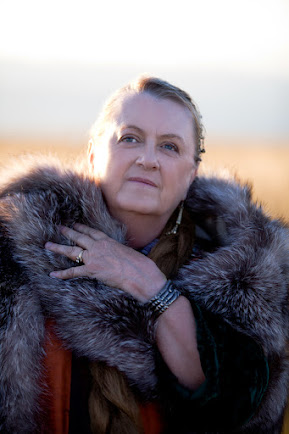 Award-winning author, Linnea Tanner, weaves Celtic tales of love, magical adventure, and political intrigue in Ancient Rome and Britannia. Since childhood, she has passionately read about ancient civilizations and mythology. Of particular interest are the enigmatic Celts, who were reputed as fierce warriors and mystical druids.
Linnea has extensively researched ancient and medieval history, mythology, and archaeology and has traveled to sites described within each of her books in the Curse of Clansmen and Kings series. Books released in her series include Apollo’s Raven (Book 1), Dagger’s Destiny (Book 2), Amulet’s Rapture (Book 3), and Skull’s Vengeance (Book 4).
A Colorado native, Linnea attended the University of Colorado and earned both her bachelor’s and master’s degrees in chemistry. She lives in Fort Collins with her husband and has two children and six grandchildren.
You can connect with Linnea Tanner via these platforms -
Website: https://www.linneatanner.com/

Amazon Author Page: https://www.amazon.com/Linnea-Tanner/e/B01N6YEM04
Goodreads: https://www.goodreads.com/author/show/16474282.Linnea_Tanner
You can learn more about the author and the book by visiting the other blogs on this tour - Thank you so much for hosting my blog tour for "Skull's Vengeance," for for your support. It is a fabulous presentation!