Welcoming Tracey Warr and her book - The Anarchy - to my blog. 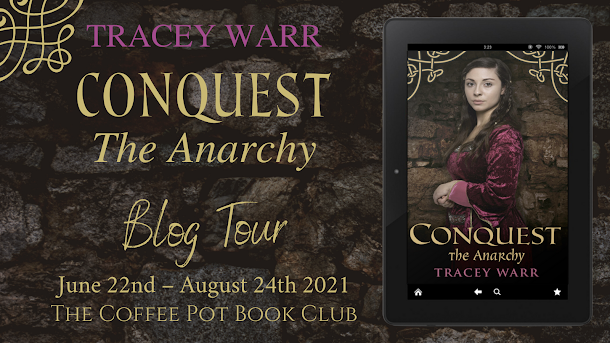 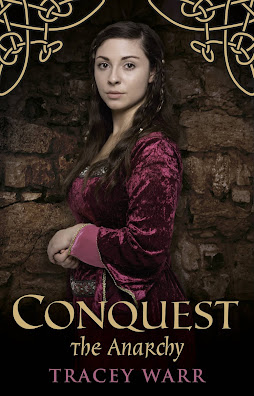 Unhappily married to Stephen de Marais, the Welsh princess, Nest, becomes increasingly embroiled in her countrymen’s resistance to the Norman occupation of her family lands. She plans to visit King Henry in the hope of securing a life away from her unwanted husband, but grieving for the loss of his son, the King is obsessed with relics and prophecies.

Meanwhile, Haith tries to avoid the reality that Nest is married to another man by distracting himself with the mystery of the shipwreck in which the King’s heir drowned. As Haith pieces together fragments of the tragedy, he discovers a chest full of secrets, but will the revelations bring a culprit to light and aid the grieving King?

Will the two lovers be united as Nest fights for independence and Haith struggles to protect King Henry?

You can purchase this book and others from the series via - 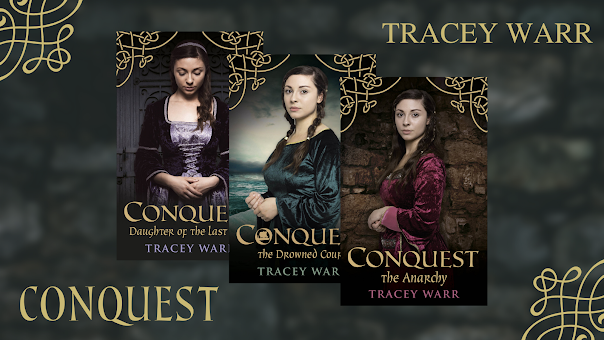 ‘Hold still, man!’ Gwenllian cried. Einon, one of the men serving Cadell’s father, sat before her as she struggled to weave the tiny, folded message into the strands of his bushy, red beard. Cadell pinched a hand over his nose and mouth to stop his snort of laughter, but it was near impossible to hold it all in, and his stepmother Gwenllian glanced sidelong at him. ‘You’re not helping, Cadell!’ she exclaimed.

Einon was also doing his best not to laugh. ‘It’s a mite ticklish, my queen.’

Gwenllian sat back to take a frustrated break from her third attempt to entwine the parchment in the beard. Twice before she had almost got it suspended in the wiry red hairs so that it was invisible and carefully couched. But as soon as Einon stood and drew himself up to his considerable height, the tiny letter dropped to the floor. ‘This is no good! It won’t work!’ Gwenllian groaned, her face pink with frustrated effort.

‘You’ve so nearly done it, mother.’ Cadell’s stepmother was not renowned for her patience. ‘Here, let me try.’ Cadell held his hand out for the small, folded square. He had penned the letter. His parents did not write, but he had learnt to do so during visits to his Aunt Nest’s household and he had written the message to the Norse lord Raegnald in a minuscule script. It read,

Gruffudd, King of Deuheubarth, sends love to his foster-brother Raegnald. I mean to attack the Normans at Cardigan, aided by the sons of Gwynedd. Will you send boats and men to assist me in this endeavour and help me to regain the kingdom that is rightfully mine?

Cadell’s slender fingers nested the message deep into the beard. He plaited strands around it so that it could not fall—not when Einon rode, or rolled over in his sleep, or stood in a gale-force wind on the ship taking him to Dublin and Raegnald’s hall. ‘There!’

‘It will hold?’ Gwenllian asked.

‘It will hold,’ Cadell said with certainty, looking at Einon. Then he turned to Gwenllian. ‘But is this wise mother?’

‘To trust our lives and throne to your brothers?’

‘Go, with my thanks and hopes,’ Gwenllian told Einon, her brusque manner belying her words.

‘My brother and I will be ready at the gate shortly,’ Cadell told him courteously in an effort to mitigate Gwenllian’s tone.

Einon tucked the forked ends of his loaded beard into his belt, bowed low to them and strode from the room.

‘I don’t want to speak in front of him. That is why you wrote the letter rather than sending a message by mouth,’ Gwenllian told Cadell.

‘Yes, I know.’ This way Einon could not have the message tortured from him if he were captured by the Normans at the port. He would be travelling from Llansteffan. That had been Cadell’s idea too. Nest had invited her nephews to visit her again and Einon would travel as part of the boys’ escort, and then slip away to Ireland by boat at night.

‘No, it’s not wise,’ Gwenllian stated. ‘I don’t trust my brothers at all, but is it wise for us, the royal family of Deheubarth, to sit here in this backwater stirring potage all day long?’

Cadell shook his head. ‘No, for sure. That is not wise.’

Tracey Warr (1958- ) was born in London and lives in the UK and France. Her first historical novel, Almodis the Peaceweaver (Impress, 2011) is set in 11th century France and Spain and is a fictionalised account of the true story of the Occitan female lord, Almodis de la Marche, who was Countess of Toulouse and Barcelona. It was shortlisted for the Impress Prize for New Fiction and the Rome Film Festival Books Initiative and won a Santander Research Award. Her second novel, The Viking Hostage, set in 10th century France and Wales, was published by Impress Books in 2014 and topped the Amazon Australia charts. Her Conquest trilogy, Daughter of the Last King, The Drowned Court, and The Anarchy recount the story of a Welsh noblewoman caught up in the struggle between the Welsh and the Normans in the 12th century. She was awarded a Literature Wales Writers Bursary. Her writing is a weave of researched history and imagined stories in the gaps in history.

Tracey Warr studied English at University of Hull and Oxford University, gaining a BA (Hons) and MPhil. She worked at the Arts Council, Institute of Contemporary Arts, Chatto & Windus Publishers, and edited Poetry Review magazine with Mick Imlah. She also publishes art writing on contemporary artists, and in 2016 she published a future fiction novella, Meanda, in English and French, as part of the art project, Exoplanet Lot. She recently published a series of three books, The Water Age, which are future fiction and art and writing workshop books - one for adults and one for children - on the topic of water in the future. She gained a PhD in Art History in 2007 and was Guest Professor at Bauhaus University and Senior Lecturer at Oxford Brookes University and Dartington College of Arts. Her published books on contemporary art include The Artist’s Body (Phaidon, 2000), Remote Performances in Nature and Architecture (Routledge, 2015) and The Midden (Garret, 2018). She gained an MA in Creative Writing at University of Wales Trinity St David in 2011. She is Head of Research at Dartington Trust and teaches on MA Poetics of Imagination for Dartington Arts School.

You can learn more about the book and the series by visiting the other blogs on this tour, 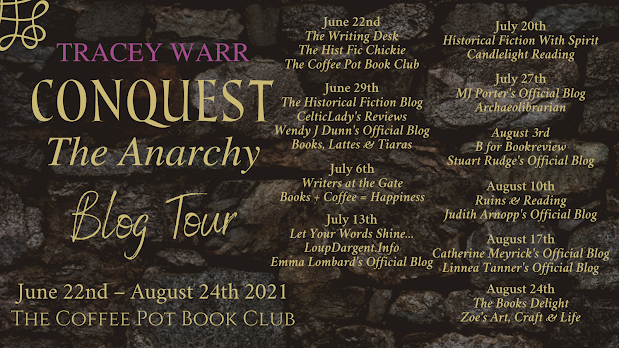