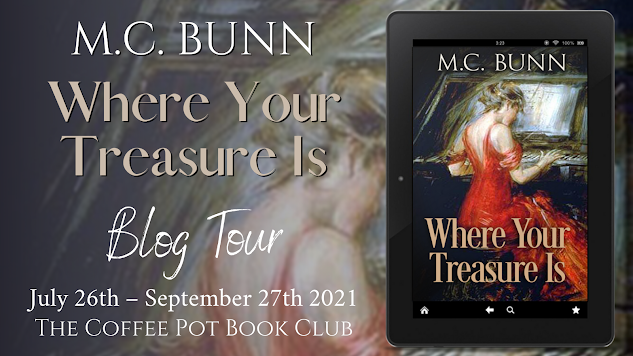 Where Your Treasure Is 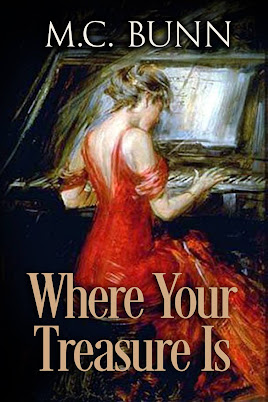 Feisty, independent heiress Winifred de la Coeur has never wanted to live according to someone else’s rules—but even she didn’t plan on falling in love with a bank robber.

Winifred is a wealthy, nontraditional beauty who bridles against the strict rules and conventions of Victorian London society. When she gets caught up in the chaos of a bungled bank robbery, she is thrust unwillingly into an encounter with Court Furor, a reluctant getaway driver and prizefighter. In the bitter cold of a bleak London winter, sparks fly.

Winifred and Court are two misfits in their own circumscribed worlds—the fashionable beau monde with its rigorously upheld rules, and the gritty demimonde, where survival often means life-or-death choices.

Despite their conflicting backgrounds, they fall desperately in love while acknowledging the impossibility of remaining together. Returning to their own worlds, they try to make peace with their lives until a moment of unrestrained honesty and defiance threatens to topple the deceptions that they have carefully constructed to protect each other.

A story of the overlapping entanglements of Victorian London’s social classes, the strength of family bonds and true friendship, and the power of love to heal a broken spirit.

With a howl, the man flung the wash jug against the wall.

The man clutched the washstand, his head bowed. “I wanted to wear you out, so’s I could get some rest. You’re so pig-’eaded! I wasn’t goin’ to ’urt you. Couldn’t you see that?”

The man nodded and offered a rag from the basin. She shook her head.

Winifred considered what “softness” might mean to him. “Well, it’s not the way I’m used to being treated.”

Court heard the quiet defiance and liked her for it. She refused to be broken. He felt in his pocket for his neckerchief and dipped it in the basin. “Your face, let me see what I done.”

Court knelt, holding out both his hands. He edged forward very slowly, coming at her from the side. She pressed as far back as possible into the corner and lifted her chin, grimacing and eyeing him with equal caution. Suddenly, he had her.

“Oh, that stings!” Wincing, she tried to push away his hand. He ignored this. His touch was assured, his tone dry and matter-of-fact. He moved her jaw and asked questions. No, her teeth felt fine. Yes, her head ached. No, she wouldn’t be sick again. Except for her bruises, especially those on her wrists, she didn’t hurt. “You talk like old Dr. Frost.”

“I’ve been in lots o’ fights, so I’ve met a few ’o calls themselves doctors.”

The backs of his hands were like leather, the knuckles scarred like his face. “You really are a prizefighter, aren’t you?”

He sat on the mattress and leaned against the wall, resting his arms on his drawn-up knees. Like her, he seemed weary, even unhappy. How cold the room was!

He sniffed loudly and wiped his nose on his sleeve. “Don’t no one tease you at ’ome?”

She frowned and folded her hands. “Not like that. He’s a gentleman.”

Court felt this was a fair shot. It was her right to remind him of his place. But with her finally quiet, he felt like a stand-in actor who’d lost his script. They would be together for hours, maybe all night, for it still sleeted heavily. He raked his wounded hand through his hair, then examined the bite marks. Had she wanted a cab for hire, he would have known how to act, what to say. Avert eyes, bow head, and await commands. “Yes ma’am,” “no ma’am.” A few coins later, the shreds of his dignity intact, he could’ve driven away with a tale to tell Sam and Seamus at the Boar and Hart about his brush with a grand lady. How strange, her being there with him at all. A fairy queen in her gorgeous emerald gown. It was like a story from the Arabian Nights.

“What about you?” she whispered.

Court was startled. “Me? No, there’s nobody.”

Winifred felt unaccountably embarrassed. Why had she asked him such a personal question? “I only meant it’s getting late. What would happen if you let me go? Would Geoff be very angry?” The man’s rueful laugh indicated her question’s absurdity.

“We ain’t goin’ nowhere in this weather. I’m knackered. Me legs is blocks o’ ice. Try to sleep.” He pulled up the blanket and closed his eyes. Soon he breathed deeply, his face hidden on his arms.

Winifred drew the other blanket around her and huddled inside her cloak. Long minutes passed. A draft blew through the rough floorboards. Wind rattled the window panes and jiggled the door. To keep awake, she examined the room again. A shaving kit lay on the washstand. Perhaps it held a straight-edge. If she moved the washstand and climbed onto it, she might be able to dislodge the nail. Then what? Soon, it would be dark. They were south of Saint Paul’s and the Thames, and miles from Hampstead. Her pocket was full of jewels and her purse was full of money. She would be on her own. Cautiously, Winifred withdrew her arms from her cloak. When the man did not move, she pulled off her corset and stuffed it under the mattress. If she had to run, at least she’d be able to breathe.

The man’s shoulders rose and fell with his deep, even breaths. Though he was dirty, he did not smell worse than any man who’d worked hard outdoors. It was only sweat, and horse. Even the blankets weren’t so bad, only stale. Like him, she was dead tired; but she dared not sleep. Her mind roared. The words he’d shouted as he tore about the room like a penned-up animal; the fury with which he’d smashed the jug; the way his shoulders sagged as he clung to the washstand.

When she first saw him at the bank, he reminded her of Morrant. What if her friend had been in this man’s place, or was one of the men in the soup kitchens where she’d served in the East End, or a brickmaker back home? But this wasn’t Morrant. It was one of London’s poor millions. How strange that out of that human tide, this one soul and hers had been swept together. She took off her cloak and tapped his arm.

She wiped her cheeks and held out her cloak. “I’m not! It’s the cold. Here, take half.”

Court was surprised, not to mention grateful. He felt in his pocket for his neckerchief. “You’re not afraid o’ much, are you? Too spoiled or too stupid, I’ll be bound. Not many could’ve stood up to Geoff in that alley. And you gave me ’ell!” He smiled and touched the tip of her nose with the wet cloth, and she gave the smallest smile in return. “There now, that’s better.”

The woman raised her eyes. “You’re not going to let me go, are you?” she whispered.

Court dabbed gently at the bright welt. He almost wished he had never seen those eyes—almost, but not quite. “I can’t.” 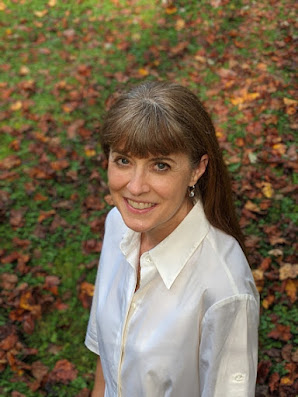 M. C. Bunn grew up in a house full of books, history, and music. “Daddy was a master storyteller. The past was another world, but one that seemed familiar because of him. He read aloud at the table, classics or whatever historical subject interested him. His idea of bedtime stories were passages from Dickens, Twain, and Stevenson. Mama told me I could write whatever I wanted. She put a dictionary in my hands and let me use her typewriter, or watch I, Claudius and Shoulder to Shoulder when they first aired on Masterpiece Theatre. She was the realist. He was the romantic. They were a great team.”

Where Your Treasure Is, a novel set in late-Victorian London and Norfolk, came together after the sudden death of the author’s father. “I’d been teaching high school English for over a decade and had spent the summer cleaning my parents’ house and their offices. It was August, time for classes to begin. The characters emerged out of nowhere, sort of like they knew I needed them. They took over.”

She had worked on a novella as part of her master’s degree in English years before but set it aside, along with many other stories. “I was also writing songs for the band I’m in and had done a libretto for a sacred piece. All of that was completely different from Where Your Treasure Is. Before her health declined, my mother heard Treasure’s first draft and encouraged me to return to prose. The novel is a nod to all the wonderful books my father read to us, the old movies we stayed up to watch, a thank you to my parents, especially Mama for reminding me that nothing is wasted. Dreams don’t have to die. Neither does love.”

When M. C. Bunn is not writing, she’s researching or reading. Her idea of a well-appointed room includes multiple bookshelves, a full pot of coffee, and a place to lie down with a big, old book. To further feed her soul, she and her husband take long walks with their dog, Emeril in North Carolina’s woods, or she makes music with friends.

“I try to remember to look up at the sky and take some time each day to be thankful.”

You can find out more about the author and the book by visiting the other blogs on this tour. 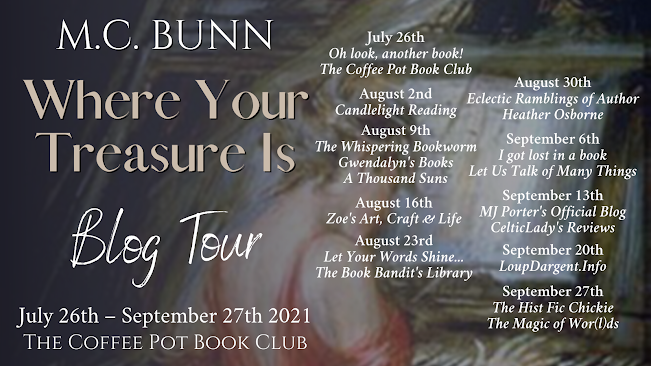 Thank you so much for hosting today's blog tour stop. We really appreciate it all your do!

M. C. Bunn
Thank you so much for hosting me on your wonderful blog and for sharing my new novel with your readers. Zoe's is a great place to be on Week 4 of the Coffee Pot Book Tour of Where Your Treasure Is. I hope you all enjoy the excerpt and meeting Winifred and Court. Happy reading to all, and may you find your heart's treasure!