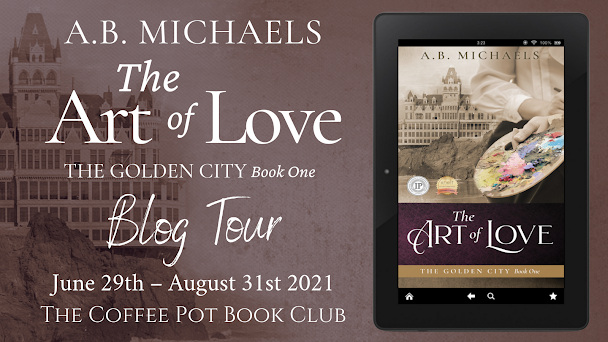 The Art of Love 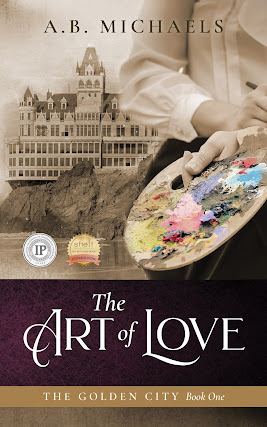 Your Journey to The Golden City begins here...

A tale of mystery, social morality and second chances during America’s Gilded Age, The Art of Love will take you on an unforgettable journey from the last frontier of the Yukon Territory to the new Sodom and Gomorrah of its time - the boomtown of San Francisco.

After digging a fortune from the frozen fields of the Klondike, August Wolff heads south to the “Golden City,” hoping to put the unsolved disappearance of his wife and daughter behind him. The turn of the twentieth century brings him even more success, but the distractions of a hedonistic mecca can’t fill the gaping hole in his life.

Amelia Starling is a wildly talented artist caught in the straightjacket of Old New York society. Making a heart-breaking decision, she moves to San Francisco to further her career, all the while living with the pain of a sacrifice no woman should ever have to make.

Brought together by the city’s flourishing art scene, Gus and Lia forge a rare connection. But the past, shrouded in mystery, prevents the two of them from moving forward as one. Unwilling to face society’s scorn, Lia leaves the city and vows to begin again in Europe.

The Golden City offers everything a man could wish for except the answers Gus is desperate to find. But find them he must, or he and Lia have no chance at all.

The Art of Love: https://books2read.com/u/mvqRDV

The Depth of Beauty: https://books2read.com/u/bORv89

The Price of Compassion: https://books2read.com/u/4jARnX

The Madness of Mrs Whittaker: https://books2read.com/u/bORvAW 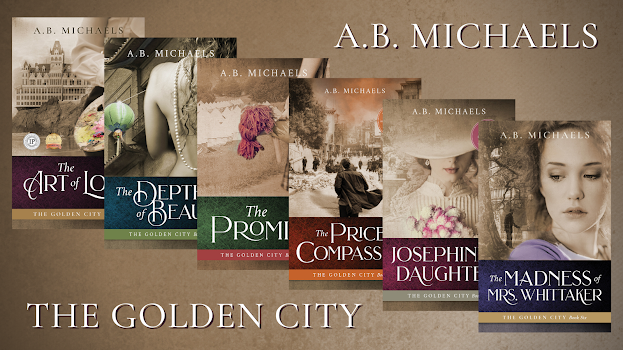 God, it feels good to hit something. Gus set up a rhythm with the punching ball, hitting the suspended rubber bag dead on in a series of short, quick jabs that drove it back and forth into the back corner walls of the gym. He kept up the pace until sweat started dripping down his face and onto his chest, and then he punched some more. Some men liked working out with the newer, heavier bags, but Gus liked the challenge of punching the fast-swinging ball bare knuckled before it punched him back. His chest heaving, he began to angle his jabs in order to catch the return swing from different angles.

“Ah, Mr. Hansen was right. He said you’d probably be here, beating the crap out of that thing. You picturing somebody’s face on that?” Will Firestone’s drawl was unmistakable.

Gus caught the ball just before it swung back and hit him between the eyes. “Yeah, do the initials W.F. ring a bell?” He grabbed a nearby towel and wiped his face and arms.

“Funny,” Will said. He gestured to Gus’s reddened hands. “Maybe you should have gone a few rounds with Jack Root instead of Kid McCoy. You could have been the first ever light heavyweight champ.”

“Right.” Gus drank from a jug of water sitting near his towel. “I assume you’re here for some other reason than giving me grief?”

“Yes, actually. Have you got time for a beer?”

Gus nodded. “Be out directly.” He headed for the locker room for a quick shower and a change of clothes. In fact, he was glad to see his partner; anything to take his mind off the mess he’d gotten himself into with Lia.

Ten minutes later Gus and Will were drinking a couple of Anchor Steams over at Fidelio’s Crab Shack, across the street from the Y where Gus habitually worked out.

“What do you need?” Gus asked.

“Not me, friend. I’m here for you. You’ve been out of sorts lately. Mr. Hansen’s noticed, I’ve certainly noticed. You think you’re good at hiding whatever’s going on, but you aren’t.”

Gus snorted. “So, now you’re not only my business partner, you’re my very own Sigmund Freud? When did I get so lucky?”

Will wouldn’t let up. “Look, I told you months ago that Lia was somebody special and that I didn’t want you hurting her. You remember?”

“And you remember I told you that you were like clockwork when it came to winding down your relationships?”

“You don’t have to remind me.”

“Yeah, well I do. Something’s going on because you’re acting much the same way you’ve acted every time you were ready to cut bait, and I swear, Gus, if you—”

“Okay. All right,” Gus admitted. “Something’s not going right, but it’s not what you think.”

The look Will gave Gus could have cut glass. Shit, on top of everything else, his own partner was ready to smack him. Well, he’d probably do the same if he were in Will’s shoes.

Gus paused and took a long pull on his beer. This was harder to get out than he thought. But he needed to vent or he really was going to hit somebody. “All right. Not that it’s any of your damn business, but I’ve gone and done it. Plain and simple, I’ve fallen head over ass in love with Lia. She’s the best thing that’s ever happened to a lout like me, and that includes the Klondike.”

“Whoa,” Will said, leaning back in his chair. “That’s just about the last thing I thought you were going to say.”

“So what’s the problem? She doesn’t feel likewise?”

“No, I’m pretty sure she feels the same way.”

Will tipped his glass to Gus’s. “So, what’s the problem? You pick a date, you rent a hall …”

Gus rolled his shoulders. “Ah, not so fast. There’s a slight problem.”

“Yeah, what? Don’t tell me she doesn’t want to get married. I mean, I wouldn’t blame her after a messy divorce and all, but …”

“Well, what are you waiting for? If you want her, you’d better claim her before somebody else does. Marriage is the logical next step. That’s what they tell me, anyhow.”

“Except for one hitch …”

Will glared at Gus and grabbed him across the table. “What?! Why, you miserable prick—”

Gus stopped Will’s arm and broke his grip. “Hear me out,” he growled.

“Damn you, this better be good.” Will was breathing hard. Gus had never seen him so ornery.

“Look, nine years ago I thought with my cock instead of my head, and I got married. We went up north and had a baby girl right away. Mattie, my wife, couldn’t hack it, so she took our daughter back down to Seattle. We both knew our marriage wasn’t workin’ out, but she said she’d wait for me … only she didn’t.” He counted off on his fingers. “I checked the boarding house where she’d lived. They said she’d gone down south with a new friend she’d met named Bethany Jones. I met the woman down at her family’s ranch. She said Mattie never made it down that far.”

“Supposedly she thought I was dead and took off with an old childhood friend she ran into—some bloke I’d never heard of—while they were taking a break from their journey here in San Francisco. I’ve had Pinkerton’s men on it for years. Every time they find a missing person, every time they find a woman’s body …” his voice hitched. “You don’t know what it’s like, not knowing where your little girl is, whether she’s safe or has enough to eat, or …” He stopped, took another swig of beer. Pulled himself together. Finally, he looked up at Will. “So, you know that saying ‘between a rock and a hard place’? Well, that’s precisely where I am.”

“Why not? Because there’s no way in hell a woman like her is going to stick with a man who can’t give her everything, including a ring on her finger. And I can’t give her that ring because I can’t find my goddamn wife to get a divorce from her—that’s why not.”

Will straightened in his chair and pulled out a small notebook and pencil from the inner pocket of his jacket. “What the name of that rooming house?”

“The Empire. Run by an old biddy named Partridge, I think. Yeah, Eugenia Partridge. Why?”

“I’m headed up to Seattle to seal that deal with Rochester. If I have time, maybe I’ll poke around. See what I can find out.” He shrugged. “Couldn’t hurt.”

Gus shook his head. “No point in it. If the Pinkertons couldn’t find any leads, I doubt you will.” He rose from the table and reached for his wallet. “But thanks all the same. I appreciate it.”

Will stayed Gus’s hand. “I’ll get this,” he said, pulling out his own billfold. “But, Gus?”

“You know you’ve got to tell her.”

Gus nodded and heaved a sigh. “And that, Dr. Firestone, is why I’ve wanted to punch the hell out of something all week.”

A native of California, A.B. Michaels holds masters’ degrees in history (UCLA) and broadcasting (San Francisco State University). After working for many years as a promotional writer and editor, she turned to writing fiction, which is the hardest thing she's ever done besides raise two boys. She lives with her husband and two spoiled dogs in Boise, Idaho, where she is often distracted by playing darts and bocce and trying to hit a golf ball more than fifty yards. Reading, quilt-making and travel figure into the mix as well, leading her to hope that sometime soon, someone invents a 25+ hour day.

You can learn more about the book and the series by visiting the other blogs on this tour. 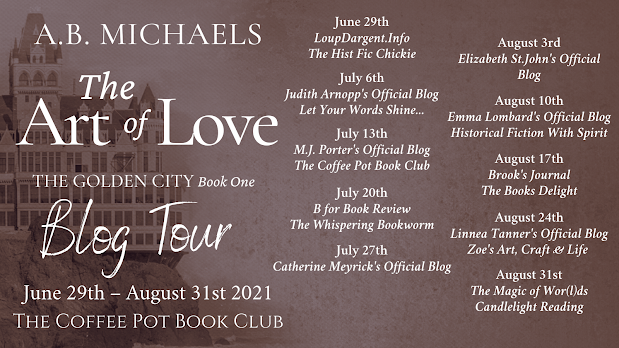 Thank you for hosting my work!