Today I am welcoming author Benjamin J Gohs and his new book - A Thin Porridge - to my blog as part of the blog tour hosted by The Coffee Pot Book Club (founded by Mary Anne Yarde). 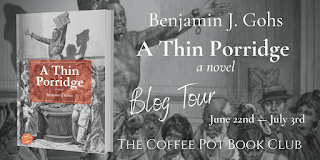 I'm delighted to be able to share an excerpt with you all which I will do after I've introduced the book.
A Thin Porridge
By Benjamin J Gohs 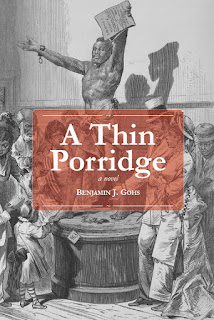 When 19-year-old Abeona Browne's renowned abolitionist father Jon Browne dies in summer of 1860, devastating family secrets are revealed, and her life of privilege and naiveté in Southern Michigan becomes a frantic transatlantic search for answers—and someone she didn't even know existed.

Still in mourning, Abeona sneaks aboard the ship carrying her father’s attorney Terrence Swifte and his assistant Djimon—a young man with his own secrets—on a quest to Africa to fulfil a dying wish.

Along the journey, Abeona learns of her father’s tragic and terrible past through a collection of letters intended for someone he lost long ago.

Passage to the Dark Continent is fraught with wild beasts, raging storms, illness, and the bounty hunters who know Jon Browne’s diaries are filled with damning secrets which threaten the very anti-slavery movement he helped to build.

Can Abeona overcome antebellum attitudes and triumph over her own fears to right the wrongs in her famous family’s sordid past?

So named for an African proverb, A Thin Porridge is a Homeric tale of second chances, forgiveness, and adventure that whisks readers from the filth of tweendecks, to the treachery of Cameroons Town, across the beauty of Table Bay, and deep into the heart of the fynbos—where Boer miners continue the outlawed scourge of slavery.

You can purchase this book from any of the following links -

Excerpt 1 from chapter “A Most Dubious Grimmis”

Grimmis brushed his lapel daintily. “The captain has provided us with sustenance, fine spirits and interesting company. Least I can do is humor with a story.”

“That's more like it!” Captain Stuart slapped the table and roared with approval.

“My real name, you might imagine, isn't Dubious Grimmis. Though, you might say, my appearance had a significant impact on my moniker. I was never given a name, not by my mother. I am the result of a failed Irish Catholic, who found her demise in the arms of a failed termination of pregnancy.”

“As she was dead prior to my arrival, the woman who carried me to some weeks before term was unable to label me as is customary. The butcher, meaning to run me through, glanced my brow and noggin but evidently pierced some critical portion of my dear mother's undercarriage. I say 'butcher' with a tongue in cheek as I was nearly murdered in the womb and delivered in the basement of a meat shop. It was the winter of 1830, in the fair city of Detroit, if the policeman who found me is to be believed.”

“I was given a name as a lad by some clerk I've never met. But I don't remember ever being called by it. When one looks as I do, people tend to avoid you as much as is possible. And when they address you, it is generally in the same manner as you've seen here tonight. Mumbles, groans, and words I'll not repeat.

“As for the rest of my appearance, I was born prematurely. Tiny. But, as runts sometimes do, I grew tall and stout. Though that has played havoc on my joints. The paleness of my skin, the doctors say, is also due to the early birth. But what do doctors know?”

There were a few polite chuckles and Mrs. Astor was heard to whisper “poor dear.”

The group was rapt. All had stopped eating. Only the occasional drink was drunk.

“Tormented and ignored by my fellows. Had but one friend, though not for lack of trying. When I was about nine, a new nurse came to the orphanage. Pretty young thing. Same age as Ms. Browne, I might venture. Her eyes made me safe and happy. Just to hear her voice was a delight. She saw how I was treated. Took special effort to see me cared for. We walked. She read to me. Spoke of her own childhood. Those next few years were unlike any I had endured. Inseparable. The mother I never had.”

“Well, eventually, mummy found herself a gentleman. A doctor who'd been treating us in quarterly visits for a couple seasons. Rather abrupt our walks stopped, stories too. All but a passing wave outside or smile from her in the hall. I began to resent her … and hate him.” Grimmis paused his story to give the crowd another good looking over. No one was laughing now. “I followed her one night.”

Mrs. Astor and her daughters all whispered, “oh my.”

“Awakened to lamplight under the door. A shadow dashed by. I peeked out in time to see her heading downstairs. I went after but halted in the main lobby, bedazzled by blinding moonlight that spilt through the upper windows. I remember it so vividly. I went to the curtain, expecting to see them riding off or taking a stroll. But I heard noises from the basement. I crept to the back corner from which dim light flickered. And there they were.”

The captain roared again with delight.

Mrs. Astor groused at her daughters to never-mind such prurience.

“Well, what did you do with such an eyeful, old man?” Captain Stuart gulped his drink.

Grimmis spoke now with fiendish delight. “I took an ax off the wall and sunk it into the good doctor's back.”

The group burst into exclamations of horror and disbelief.

“Wasn't strong enough to kill him but they sent me to a boys prison in the woods somewhere. There was this particular guard who told me: 'Boy, you have the most dubious grimace.' It encapsulated my short lifetime of hardship and wrongdoing in a rather superb fashion. It was a name unlike any other, and it was mine. Took it for my own in my eighteenth year.”

“But it's not even a real name,” said Mrs. Astor with sad irony.

Everyone laughed, even Abeona. 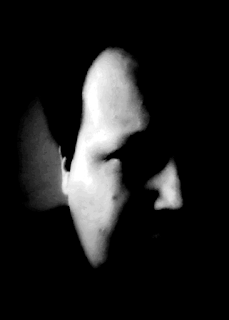 Benjamin now divides his time between writing literary thrillers and managing the community newspaper he co-founded in 2009.

You can contact Benjamin J Gohs via the following -

I hope you all wlcomed having a peek at this book and that you will have a look at Benjamin's work.That's it for now. Till the next time.

Thank you so much for hosting Benjamin's tour today!