Today I am taking part in the blog tour hosted by The Coffee Pot Book Club featuring Mary Anne Yarde and her novel - The Du Lac Curse - which is book five of The Du Lac Chronicles. 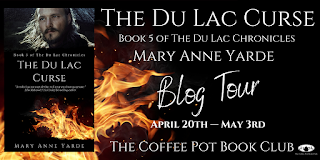 Firstly, I'll introduce the book before sharing an excerpt.

Book 5 of The Du Lac Chronicles 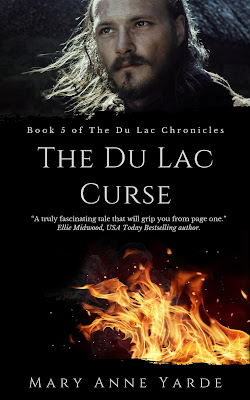 God against Gods. King against King. Brother against Brother.


Mordred Pendragon had once said that the sons of Lancelot would eventually destroy each other, it seemed he was right all along.


Garren du Lac knew what the burning pyres meant in his brother's kingdom — invasion. But who would dare to challenge King Alden of Cerniw for his throne? Only one man was daring enough, arrogant enough, to attempt such a feat — Budic du Lac, their eldest half-brother.


While Merton du Lac struggles to come to terms with the magnitude of Budic's crime, there is another threat, one that is as ancient as it is powerful. But with the death toll rising and his men deserting who will take up the banner and fight in his name?

You can purchase The Du Lac Curse here -

“Where will you go? What will you do now that you are a free man?” Hirsh had finally asked, breaking the silence.

Garren had shaken his head and sighed. “I don’t know,” he had replied with honesty. Freedom came with possibilities. Many possibilities. And yet, he feared that this was a dream. He feared that all too soon, it would be time to wake up and live with the bitter disappointment of his reality.

“I have never asked, but where are you from? I know from looking at you that you are not from the Eastern Empire.”

“Yes, you can,” Hirsh had stated with the firmness of a father. “I know you were not born a slave. What do you remember about your homeland?”

“I don’t know… Grass... Sea,” Garren had closed his eyes as he spoke and he had tried to picture his homeland. For a moment, he had fancied that he could feel the breeze coming off the ocean, and he could hear the sound of the gulls as they circled overhead. He could see the waves as they crashed against the pale red rocks of the cliff face. Just for the briefest of moments, he could picture his brother, Alden, glancing back at him with a grin on his face as they raced across the beach on the horses their father had bought for them. Brittany. His homeland. His kingdom.

“Brittany?” Hirsh had rolled the name on his tongue as if he were tasting some strange exotic wine.

Garren had opened his eyes. He had not realised he had spoken his kingdom’s name aloud.
“Where is that?”

Garren had stared at the desert in front of them, but he did not see the vastness of the sand. Instead, he saw a castle. He saw a chamber, filled with laughter and soft candlelight. He saw his wife as she turned to look at him. She was smiling and cuddling the cat that he had rescued for her. Amandine...

“Where is Brittany?” Hirsh had asked again.

“It does not matter,” Garren had replied quietly as he tried to hold on to the image of his wife. But it faded, as memories do. “I cannot go back there,” Garren had mumbled. He had raised his hand to his mouth and began to chew on his already bitten fingernails. It was a nervous habit he had acquired over the years. Sometimes he bit his nails past the quick until they bled. And even then, he would not always stop.

“Why not?” Hirsh had persisted in his questions. Demanding answers, when Garren had no answers to give.

They had not come for him, his brothers. They had not searched. He was dead... He was dead to them. His wife had, no doubt, remarried. There was no life waiting for him in Brittany. He would be a fool to return.

So, this is what it felt like when your wildest and most unattainable dreams came true. Freedom had left a bitter taste in his mouth.

“My father…” Garren had tried desperately to recall his father’s face. But ten years was a long time, and his father had died a few years before Garren had been taken — stolen.

Hirsh had put his arm around him again. “You do not have to talk about it.”

“He was the king,” Garren had mumbled, and he had turned to look at his former master. “My father was the king…” 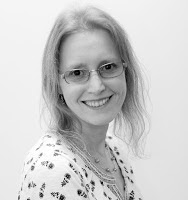 Born in Bath, England, Mary Anne Yarde grew up in the southwest of England, surrounded and influenced by centuries of history and mythology. Glastonbury — the fabled Isle of Avalon — was a mere fifteen-minute drive from her home, and tales of King Arthur and his knights were part of her childhood.

I hope you will check out Mary Anne Yarde's work and enjoy.
Till the next time
Take Care Zoe