Welcoming Anna Belfrage and her book - His Castilian Hawk (The Castilian Saga, Book 1) - to my blog

Today I'm welcoming Anna Belfrage and her book - His Castilian Hawk (The Castilian Saga, Book 1) - to my blog as part of the blog tour hosted by The Coffee Pot Book Club (founded by Mary Anne Yarde). 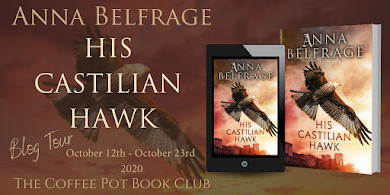 I'm delighted to be able to share a review with you, but first I will introduce the book.

His Castilian Hawk By Anna Belfrage 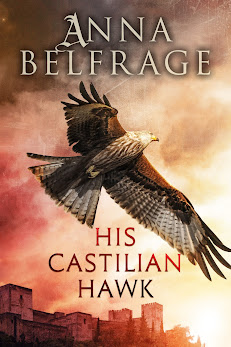 For bastard-born Robert FitzStephan, being given Eleanor d’Outremer in marriage is an honour. For Eleanor, this forced wedding is anything but a fairy tale.

Robert FitzStephan has served Edward Longshanks loyally since the age of twelve. Now he is riding with his king to once and for all bring Wales under English control.

Eleanor d’Outremer—Noor to family—lost her Castilian mother as a child and is left entirely alone when her father and brother are killed. When ordered to wed the unknown Robert FitzStephan, she has no choice but to comply.

Two strangers in a marriage bed is not easy. Things are further complicated by Noor’s blood-ties to the Welsh princes and by covetous Edith who has warmed Robert’s bed for years.

Robert’s new wife may be young and innocent, but he is soon to discover that not only is she spirited and proud, she is also brave. Because when Wales lies gasping and Edward I exacts terrible justice on the last prince and his children, Noor is determined to save at least one member of the House of Aberffraw from the English king.

Will years of ingrained service have Robert standing with his king or will he follow his heart and protect his wife, his beautiful and fierce Castilian hawk?

Forced to marry the man who killed her father and brother in battle – it is a match made in Heaven!

I had heard great things about Anna Belfrage’s books, so when I was offered an Advanced Readers Copy of her latest release, I jumped at the chance. I wasn’t quite sure what I was expecting, but what I got was a story that made me laugh, it made me cry and it also made my heart flutter.

The story centres around Robert FitzStephan, who after saving King Edward’s life is forced to marry Eleanor d’Outremer. Robert is under no illusions that this is no love match, but it does mean that he rises in station somewhat dramatically. Robert grasps the opportunity with both hands, but he intends to change next to nothing about how he lives his life, and that includes keeping his mistress, the lovely Edith. Oh, is he in for a surprise, for his new wife, Eleanor “Noor” may have something to say about that! Their relationship is one of misunderstandings, passion, and eventually love.

The historical detailing in this book is astounding. Although I don’t know much about Edward I’s reign, I did know that he was a ruthless king. The plight of Dafydd ap Gruffydd’s wife and children really moved me. Especially when Edward knew what it was like to lose a child, and yet he somehow justifies his actions. His treatment of Elizabeth Ferrers is heartbreakingly awful.

There is a lot of story in this book, and there are several interwoven plot threads which I think is the reason that makes it so hard to put down. I really enjoyed this book, and I can't wait to get my hands on book 2! 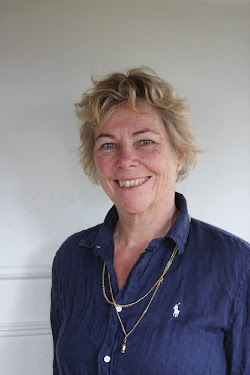 Had Anna been allowed to choose, she’d have become a time-traveller. As this was impossible, she became a financial professional with two absorbing interests: history and writing. Anna has authored the acclaimed time travelling series The Graham Saga, set in 17th century Scotland and Maryland, as well as the equally acclaimed medieval series The King’s Greatest Enemy which is set in 14th century England.

More recently, Anna has published The Wanderer, a fast-paced contemporary romantic suspense trilogy with paranormal and time-slip ingredients. While she loved stepping out of her comfort zone (and will likely do so again ) she is delighted to be back in medieval times in her September 2020 release, His Castilian Hawk. Set against the complications of Edward I’s invasion of Wales, His Castilian Hawk is a story of loyalty, integrity—and love.

You can connect with Anna via the following platforms -

You can learn more about His Castilian Hawk by visiting the other blogs taking part in this tour and reading their posts. Here's the tour schedule - 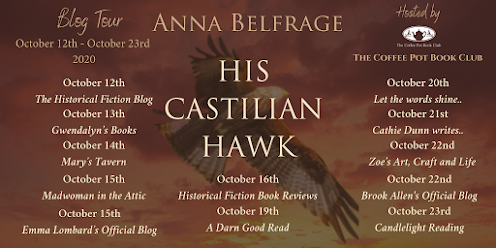 I do hope you wil check out Anna Belfrage's work.

Such a fabulous review - I am so glad you enjoyed His Castilian Hawk.

A big thank you for hosting today's stop.

Hi Zoe!
Thank you for a lovely review - and for taking the time to read my book. Glad you enjoyed it.

Thank you so much for participating in my tour and writing such a lovely review!