So much has happened since I last joined in our Wednesday desk share. This post maybe longer than is norm so please forgive me.

Everyone is meeting up over at LLJ place while Julia continues her road to recovery. So today's desk looks like this - 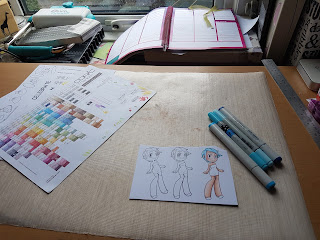 My friend's little girl will be 5 so I thought I'd colour up Kaylee from Some Odd Girl in the colours of Frozen. Colouring up a storm at the moment but can't share yet!

Anyway today I adopted a giraffe!

Anyone who knows me will know giraffes are my fav animal (zebras too) I recently watched the BBC programme that highlighted the work of the Giraffe conservation organisation
so I checked out their website and decided to adopt a giraffe for a year. 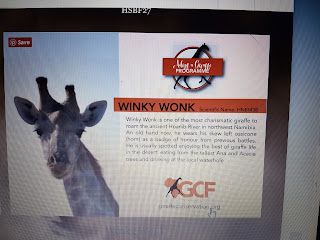 Basically the fact that he has a horn that is bent is what made me choose him. I'm all wonky too what with my Scoliosis so it struck a cord with me!

Will share more information once I receive my adoption stuff.

The other main thing that has happened is that Keagan had 2 weeks holiday. It was so good having my boy home. We chilled alot but we also went to Belfast for 3 days to stay with my cousins.

I've not flown since 2011 so I was apprehensive about it but it all went well. I used my wheelchair right onto the airplane. The assistance staff at both airports were fabulous.

My cousins live in the Titanic quarter which is very modern. Everything was walking distance (for Keagan not me, he pushed me around!) My cousins live in the middle block of apartments, however they are at the rear so don't have a full on water view. But they do have one side window that looks out over the water. Stunning location. 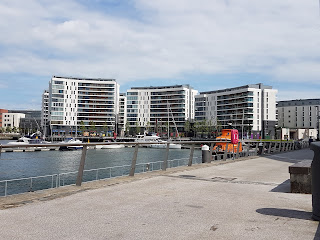 We enjoyed the Titanic museum and discovery tour. Here's the actual slipway where Titanic was built. The layout is mapped in the stone work. The poles mark the gantry points. This photo does not do the size justice. The poles are only half the height of the actual ship! 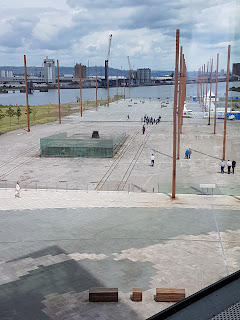 I took this photo of the museum when we were on the slipway. The museum was built this shape to honour the great ships built there. Our tour guide took us around explaining everything Titanic! 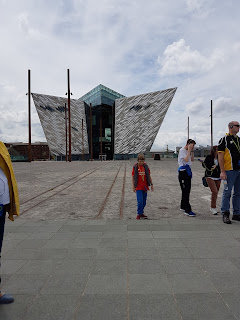 The city itself is fascinating. Lots of old buildings and wonderful architecture. Super street art. And the people were so friendly. 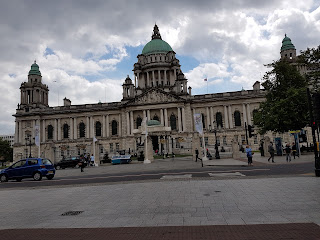 City Hall - stunning inside and out. 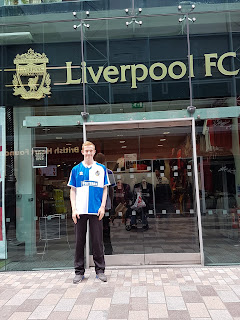 We found the official Liverpool shop. Keagan had his Rovers shirt on so had to take this pic. We did go in and Keagan bought himself a shirt half price! (We support Bristol Rovers but follow Liverpool) 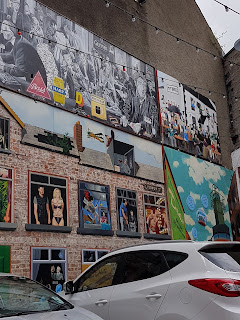 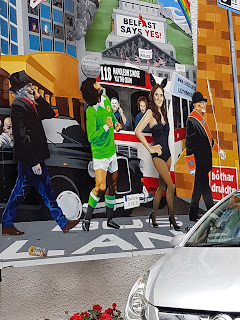 My cousin took us to an older part of the city where this alleyway was painted with amazing artwork. It backs onto the oldest building in Belfast. Here we are outside - 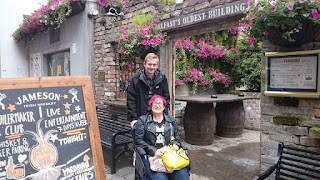 We also met up with our friend's from football. We met them at Rovers when their son/brother Michael played for Rovers. He now plays for Peterborough. He recently was called up to the Northern Ireland squad before the Euros but didn't make the 23 man squad that went. Kim came and picked us up and we went out for dinner and spent the evening catching up as it's been 2 and half years since we last saw them. 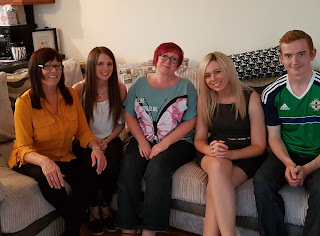 Yes Keagan is wearing a Northern Ireland shirt. He bought it and had Smith 25 put on it as that's Michael's name/number. 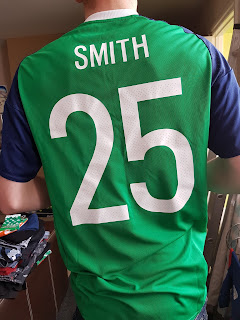 The fanzone for the footy was just along from where we stayed so we went along to watch some of the Republic of Ireland game. It was busy at the front so we stayed back. Here's a selfie of us all. Obviously I'm in my chair. I'm not that short really!! 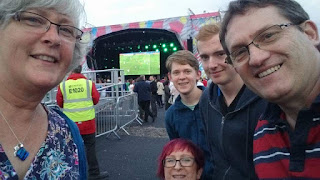 Sorry it's a long post but lots to catch you up with!
Take care Zo xx

I can cope with long posts esp when they're so full of smiles. I'm really glad you had a great time and your travelling was successful for you.
Have a great week.
Hugs,
Annie x #8

A wonderful trip Zoe and it was very interesting to see another side of Belfast. the artful streets were exciting. Art is such a peaceful invigorating way to communicate.
have a artsy crafty week
Monica #34

Oh what a lovely blog post with lots of photos! I enjoyed seeing your trip to Belfast. Great seeing Keagan too. I'm glad you had such a good time and that the flight went well.
Looking forward to reading more about the wonky giraffe....
Happy WOYWW,
Lisca#12

Glad you got to have such a lovely break with Keagan and family and friends! Looks really interesting! Love giraffes too! Hugs, Chrisx 37

Thank you for the tour today. I am sure you enjoyed the time with your son, Mine is away as well & I cherish his visits even if he drives me crazy at the same time!

What a fab trip! I would love to visit the actual Titanic museum. We have a replica in Branson MO that I've gone to several times. More touristy I think than the one there in Belfast. Good to have time with our kids, isn't it? Keagan looks to be enjoying himself. Maybe he need holiday too. Creative Blessings! Kelly #32

great photos from Ireland, looks fabulous - especially approve of the trip to the Liverpool shop!! thanks for visiting Helen #2

Hi Zoe, Looks like you all had a fab time.

Thanks for stopping by my blog.

Nice desk, great pix, sorry to hear you've been poorly. Thanks for yiour visit to my own blog