It's taken me a couple of days to calm down enough to think, to write this.

If you know me, or follow me on other social media you will already seen what happened on Saturday. I am a Gashead you see. I support Bristol Rovers. And have done so for 30 years. I've held a season ticket for many years and go to as many games as I am able.

Being disabled I use my wheelchair (yes it's blue!) & usually my mum comes to push me round the ground, in the bar and down to where my seat is in the South Stand. Mum's not really bothered about the football but comes to make sure I enjoy my day & helps me do that.

It was the last game of the season. Rovers were in 4th place. Outside of the automatic places. Basically we had to win and hope that Oxford or Accrington Stanley would drop points.

Here's my day in pictures - 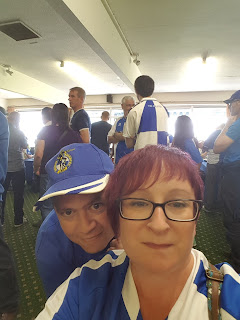 My mate Dave (he lives in Huddersfield) was down for the game and I met him in the bar before the match. Pre-match nerves were very obvious. 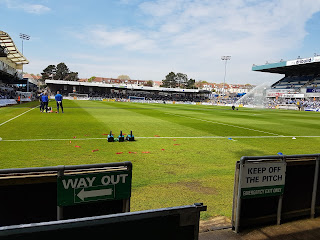 Early on it was a beautiful day. I get to my seat early so was able to take this before it all filled up. 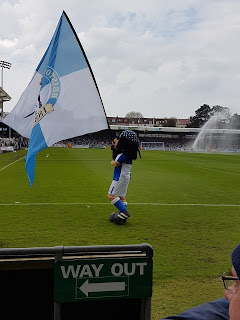 Our mascot Captain Black Arab walks around the entire ground meeting youngsters and waving his flag! 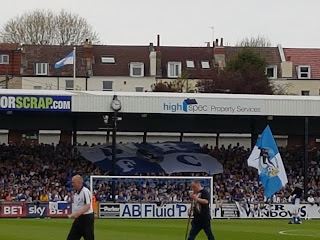 The surfer flag was out as well. 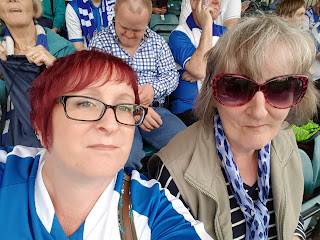 I took a half time selfie with my mum. We didn't realise then that we'd witness a very dramatic ending to our day!

At 90mins we were drawing 1 -1 which meant as it stood we would miss out on automatic promotion. Oxford were winning and Accrington were drawing. We had to win. To equal Accrington on points but we had a better goal difference.

I didn't think it would happen. The players gave everything. We had 35 shots. The ball hit everything other than the back of the net.

BUT. In the 92 min Rovers attacked once again. Matty Taylor's shot hit the post rebounding back to Lee Brown who connected with the ball with his right foot (he's a left footer normally!) and put it in the net. Cue crazy scenes of celebration before everyone realised we still have time to play and Accrington were still playing.

Me and mum stayed in the stand. Many ran on the pitch straight away. I couldn't. I stood there screaming but also knowing we had to wait for Accrington's game to finish. 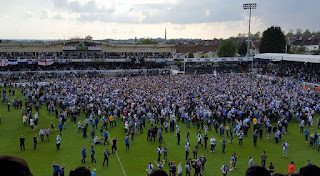 This was the scene. Taken from the high stand to my right. Over 11 thousand fans were there, (300 from our opposition). There was a subdued moment where everyone stopped. And then the news broke that Accrington's game had finished. They drew 0 - 0 which meant Rovers were promoted on goal difference. We had the same points. 85 points.The roar that went up was incredible. 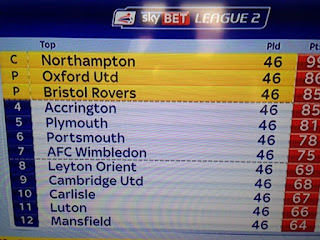 That was when I sent mum to get my chair as I was not going to sit and watch everyone on the pitch I wanted to join in!

I confess as I waited for mum I shed a few tears. I couldn't believe it.
I took a few pics on the pitch. 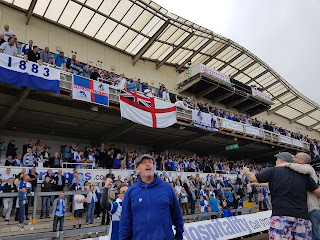 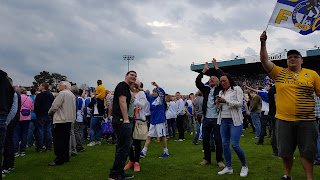 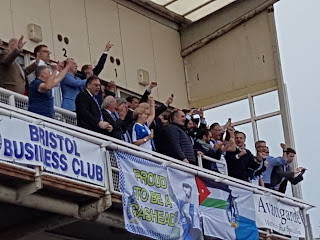 In the end box is our owner and his directors, chairman and his family.

The players were held aloft on shoulders and everyone sang and danced and celebrated together. The players hugged and kissed everyone.

I was sat at the side of the pitch when our manager came over. Yep Darrell Clarke is one amazing man! 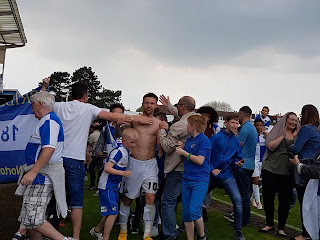 Our top goal scorer came my way as well, surrounded by elated fans. 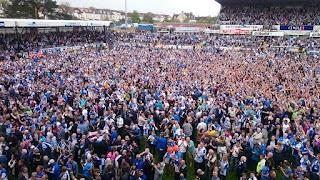 Someone took this from the executive boxes. What a scene!

I have to thank Liz - Crafty Sunflower for taking this photo of me and mum on the pitch! We waved to each other before the game as we can see each other from our respective seats. Mum was pushing me away from the crowd at this point. 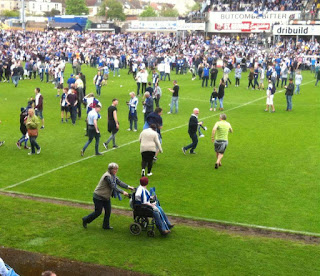 I managed to get mum to manage the crowds to capture these pictures with players. 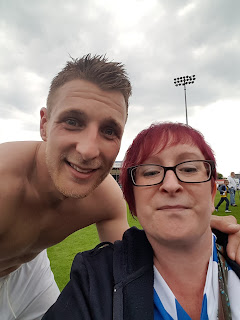 With Lee Brown - our goal scoring hero. Also 1 of my fav players. Yes I gave him a huge hug and kiss! 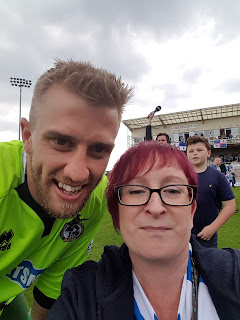 Will Puddy - yes he got a hug and a kiss too. 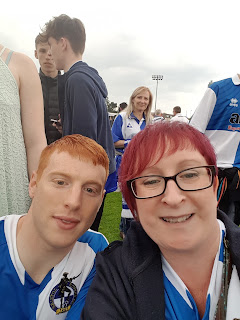 Rory Gaffney. Another recipient of a hug and kiss from me. 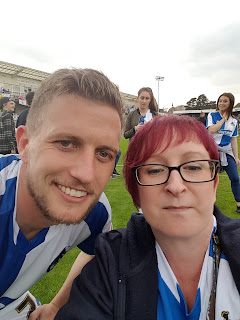 Lee Mansell - my other fav player. And yes you guessed it. I gave him a huge hug. But when it came to a kiss. He didn't just offer his cheek he grabbed my face and planted a huge smacker right on the lips. So funny. You see Lee is known for his kisses!! (Long story - he once kissed an opposition player to diffuse a situation in the pitch!)

My mum found it all rather amusing!!
So there you go. We got home just before 7. It didn't feel right to sit in home on my own, I was on cloud 9, buzzing, so me and brother Danny and sister-in-law Jen, who were also at the match, went out for a celebratory drink (well I had coke!).

Mind you our evening was very quiet compared to most. A busy road just round corner from the ground had to be shut as Gasheads filled it for many hours. Players were carried down the road on the shoulders of the fans. Even our owner went down for a while to celebrate with the fans at the pub. No security guards keeping fans and players apart like they do in the Premier league. 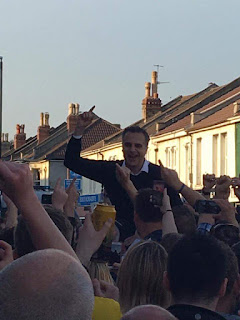 Here's our owner Wael Al-Qadi being carried to the pub. 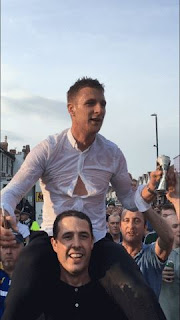 Here's Lee Brown being carried - shirt soaked in champagne & cider but it didn't matter. All the players went out with the fans and celebrated into the early hours. 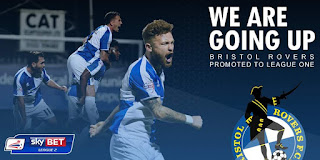 I already have my season ticket for next season. Little did I know when I bought it that I would be watching League 1 football!

Fabulous overview of the most fantastic day - thanks Zoe. When we waved to each other at the start of the game, we could only dream of the final outcome. But we did it! The amazing scenes of the celebrations after the game will stay in my memory for ever! See you next season in League 1!

PS We cracked open a bottle of champagne that evening. A perfect occasion to open it. :-D UTG

I'm really thrilled for you and your report brought out all the excitement. Well done to your team!
Jo x

Are you ever going to come down from that cloud??! xx

Zoe what a fantastic result and what a great day you had. I am not too keen of footie but then I have never been to a live match it looked like you were buzzing and your pictures with the players and the hugs and kisses from some of those studs yes I think I could become a supporter. So glad you had a good day. Love Alison xx

Amazing Zoe!
Still smiling at the result :)
Lovely blog wish I'd been there.
No play offs thankfully for our Emma.

couldn't persuade the phone to let me comment... great write up, and what fabulous memories.. get journalling them! congrats and good luck next season!