Well it's a grey day here in Somerset so I thought I'd cheer myself up by sharing another Paris adventure with you.

As you know I went to Paris with my friend Debs, who is now also sharing her thoughts and observations about Paris over on   http://debspenpot.blogspot.com/ so pop over and have a read.

Right Sunday - well we woke up full of excitement and keen to get to The Louvre.  It is an iconic museum, known for it's glass pyramid and seen worldwide by many on TV, film etc.  Looking back we both admit we were a bit naive, it was the first Sunday in the month, the day when the museum is open for free!

But it was November, so it wouldn't be that busy, right?

We arrived at around 10.30am, oh my days you should have seen the queue, it lapped the around the Pyramid & would probably take at least an hour to reached the entrance.

Here's what we saw on arrival. 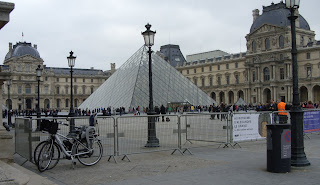 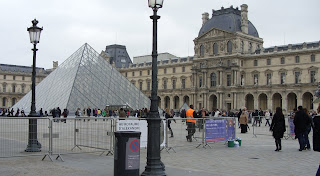 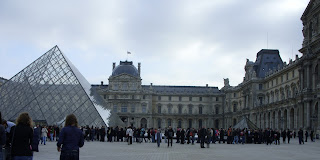 Thankfully, due to my disabilities we didn't have to join the queue, we were directed to the other entrance where our bags were manually searched as opposed to going through the scanners, and then we were allowed straight in! Phew!

The entrance area is huge, I think my eyes popped out of my head when I saw it.  Again I think my naivety played a part, I'm a country lass, who doesn't spend much time in the big cities of this world so I just wasn't expecting the enormity of it all. Daft, definitely! 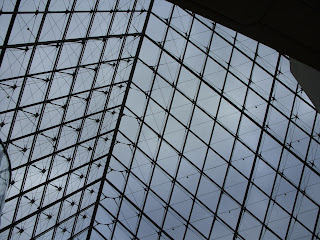 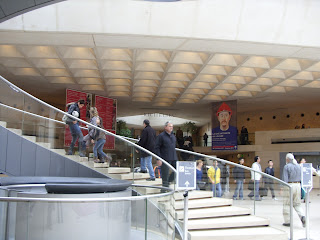 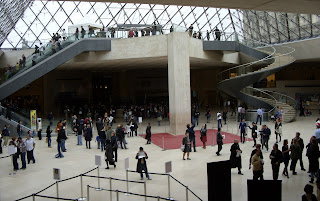 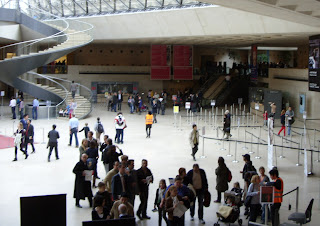 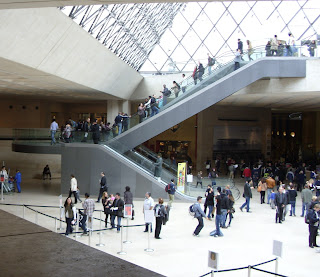 It doesn't look too bad on these pics, but this area was large, as you went one of four ways to visit the different areas of exhibitions everything became smaller in comparison and moving around was difficult, even if you were in a wheelchair or using sticks.  Don't get me wrong, there were plenty of lifts, escalators etc, but navigating your way around wasn't easy. We took a lift to try and reach another floor, up and down we went but still ended up on the same floor! Probably us mind, but the sheer numbers of people all doing the same thing made it really hard to get around. Nobody allowed room for people with disabilities, it was all push and shove, and no manners in my opinion. I was so lucky to have Debs, who looked after me and made sure I got to see what I wanted without being hurt.

Now of course a trip to The Louvre isn't complete without seeing the Mona Lisa.  But I was disappointed, the  organisation around this famous picture meant it was an awful experience trying to get to see her.  She was in a smallish room, cordoned off. At first I thought there was a queue, that would filter by her, allowing everyone to have their moment, take a no-flash photo before moving out of the way. But I was wrong.

Once more it was every man/woman for themselves.  There were stewards but they did little to control the crowd, or even to make sure people weren't being pushed about. I did manage to see the picture but didn't get to have a moment to really appreciate this iconic painting.  I quickly took a couple of pictures on my phone before getting out of there as fast as we could manage. By now I was really losing patience, I felt for Debs too, she was trying not to get barged out of the way as well as looking after me. Our excitement and enthusiasm was lost. 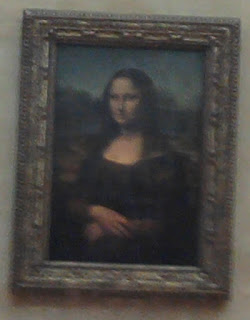 My shaky picture of the Mona Lisa! 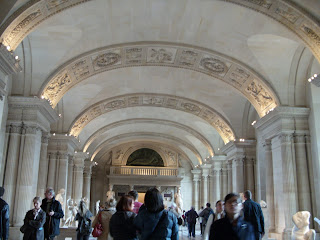 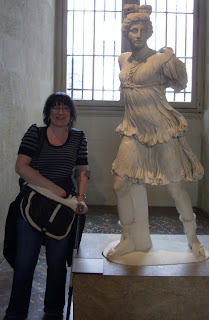 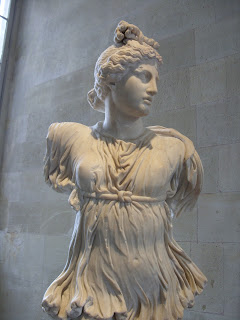 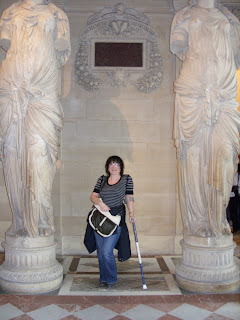 We found our way to another area that was much quieter - Greek exhibition - I was able to actually enjoy this area, and got to pose for some pics too!

But by now our enjoyment had gone, so we decided to leave, I was really disappointed with The Louvre and feel it could have been so much better if more attention had been paid to how all people could get around.  The system of lifts was not easy to navigate and trying to get through to them was hard, though maps etc were provided, not being able to use the stairs etc meant we had to go round and round before getting anywhere. I know we could've paid to have a guide, but I wanted to explore for myself not be told what to see.

Just outside, is the area that leads to the Tulliere Gardens. The sun was out, so we enjoyed the rest of the day exploring this magnificent place. 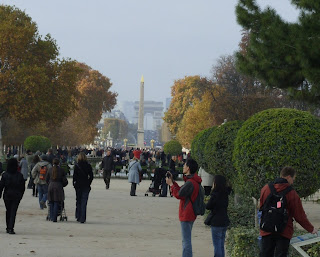 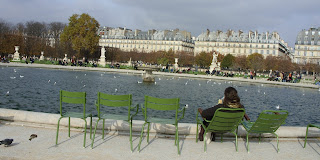 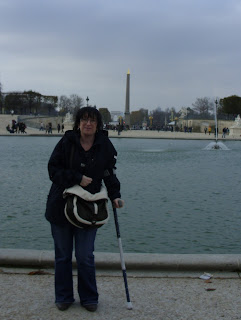 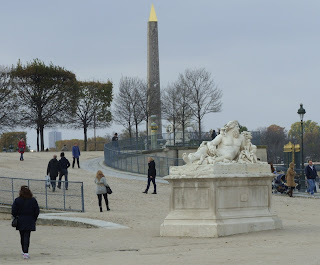 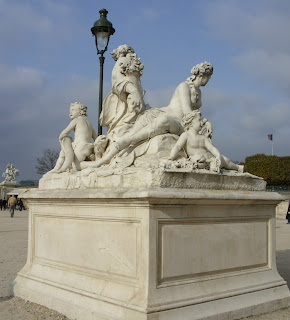 The autumnal colours were amazing.  The statues, which were everywhere, basked in sunlight made for wonderful viewing. I really enjoyed this part of the day, and I know Deb felt better not being pushed around too.  We could both relax. 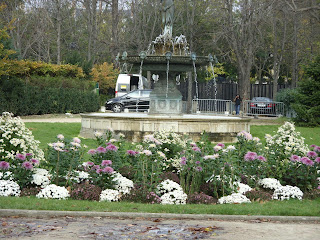 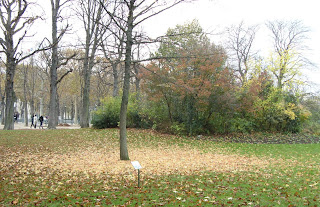 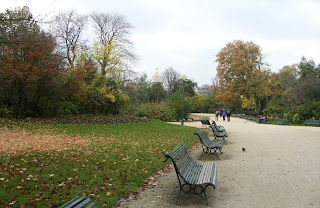 Once back in our hotel room, exhausted, we both reflected on our day.  The disappointment of the Louvre was replaced by a deep appreciation of what we had seen and an enjoyment of our afternoon in the gardens.

Hope you like this latest reflection on Paris, keep an eye for the next part, where I share out boat trip on the Seine, Notre Dame, my excitement of visiting the PSG club shop and our afternoon on the Champs Elysée!

Thanks for popping by. Take care Zo x
Posted by CraftygasheadZo at 11:43

your photos are fab,Paris looks so amazing and beautiful ,thanks for sharing .Emma xx